Call me a dork, but I’ve always loved board games. Even in high school and college, my friends and I were all about taking over the world in Risk

or becoming the next Picasso in Pictionary 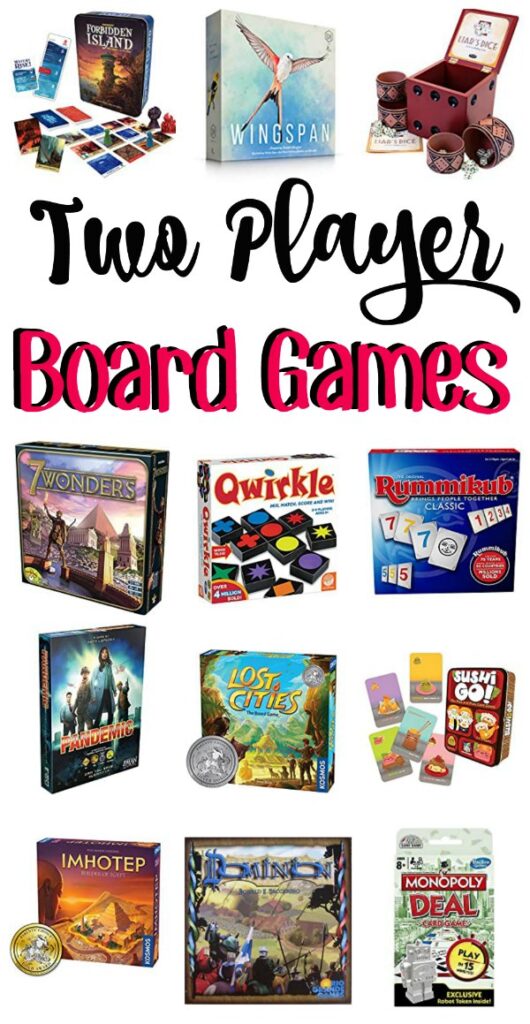 I’ve had the incredible privilege to work with youth most of my life. One of the things I love about teens is that they’re always up for a game. (Thanks for keeping me young guys!)

So upon getting married, I began my quest to find good games for two. We’ve found some keepers for sure!

Here’s just a few of our favorite two player board games:

This game is really nothing like monopoly. I mean, it’s still fun and cut throat, but it’s also fast paced and gives you more control than lady luck. Everyone we’ve introduced this to has loved it! You can play with two people or a bunch of people. Back when this first came out, it was only $5. Now it’s $8 and I can’t seem to find it anywhere but Amazon.

When our boys studied ancient history, I decided to pick up this game and boy am I glad! This is our currently family favorite (and my husband and I play it by ourselves all the time too!). Each player picks one of the seven wonders of the ancient world to build their civilization around. I will admit that this game seemed EXTREMELY complicated when we were trying to understand the instructions. We watched a youtube video of how to play it, and once you see it in action, it’s not nearly so hard to understand. Our six year old played it with us just fine (though he is an experienced gamer). I love that 2-7 players can play this without needed an expansion pack! We’ve been playing this gamer regularly for six months and it’s still one I’m itching to play! It also is a decently short game 20-40 minutes and that doesn’t really increase with the number of players since everyone plays at once.

This is a cooperative board game that is fun to play with lots of ages. I think it’s games like this that have helped our boys be comfortable with games that are geared for higher ages. Something about having to discuss strategies and options out loud together prepares them for higher level thinking. As few as two people can work together to keep their island from flooding while they race to gather artifacts from around the island. Each player is assigned a unique skill set and you’ll have to work together to keep from being swept away.

is like Scrabble for those of us who can’t spell. (Oh man, I misspelled Scrabble the first time. Yikes.) At first it seems too easy and childlike. Then half way through your first game, it dawns on you all the strategies you’ve been missing. This is super fun and can double as a learning game for younger kids!

Lost Cities – The Board Game

In this game, players have five explorers that journey down five different paths to uncover treasures and artifacts. The further you go down the path, the more points. But be aware, you can actually get negative points if you start an explorer and he doesn’t get very far.

This game knows the way to my heart. The game play itself is really fun! Similar to 7 Wonders in that there are many ways to earn points throughout the game from bird cards, eggs, bonus points, attacks etc. It takes a game or two to get the hang of the way this game works, but once you get used to it, the strategies are infinite and exciting. But what I simply adore about this game is it’s beauty and accuracy. Each bird (and there are no repeats in nearly 100 cards!) is gorgeously illustrated and everything about their “powers” are accurate from amount of eggs they lay, to wingspan size, habitat, and food choices. We learn SO much and it all feels so lovely!

Another team cooperative game! It’s all of your friends against disease spreading rampant throughout the world. Each player has their own roles and strength. You have to strategize together to save the world. More complex than Forbidden Island, but more robust.

is a classic tile game where you try and play all of your tiles down before your opponents. Runs and straights are the basic structures but you can rearrange already played tiles as long as they abide by the rules when you’re all done. It’s a good time!

This game is fun and frustrating! Each player has blocks that they want to add to Egypt’s monuments and buildings. The more of your blocks that you add to the pyramid, obelisk, burial chamber and the temple, the more points you get. But those blocks have to sail on ships and sometimes the other player gets to steer those ships before you’re ready. Lots of strategy, yet lots of chance makes this game tons of fun for two to four players.

You don’t have to like sushi to get a giggle out of this game! Build points by collecting similar sushi rolls but good luck because every turn you pass your entire hand on to the other player. When played with two people, strategy is pretty essential while playing with a bigger group makes it easier for younger kids to get lucky and win.

Dominion is pretty new to me, but I’m loving it! It’s a card game where you keep buying cards and trying to have the ultimate deck with which to get the most victory points. It sounds lame, but each time you play is unique because you use different action cards each time. (Some action cards are mean, like the spy, while others are good news for everyone.) You’ll just have to try it, you won’t be disappointed. (There are expansion packs to this game, be sure you get the original Dominion first since it’s necessary for all other games.)

. Oh my goodness, this game is a riot. Call your partner’s bluff and watch them turn beet red. Simple to get the hang of and not a time consuming game. Good for smaller groups as well. (Or over skype when your friends live too far away!)

These are just a couple of our favorite two person (or more) board games. Do you have a favorite game? I’m ALWAYS up for suggestions! Comment below!