After completing our unit on different careers, I had a better idea of what my son was interested in learning about next: Astronauts. So off we went to the library to find books about astronauts. Here are our favorites. 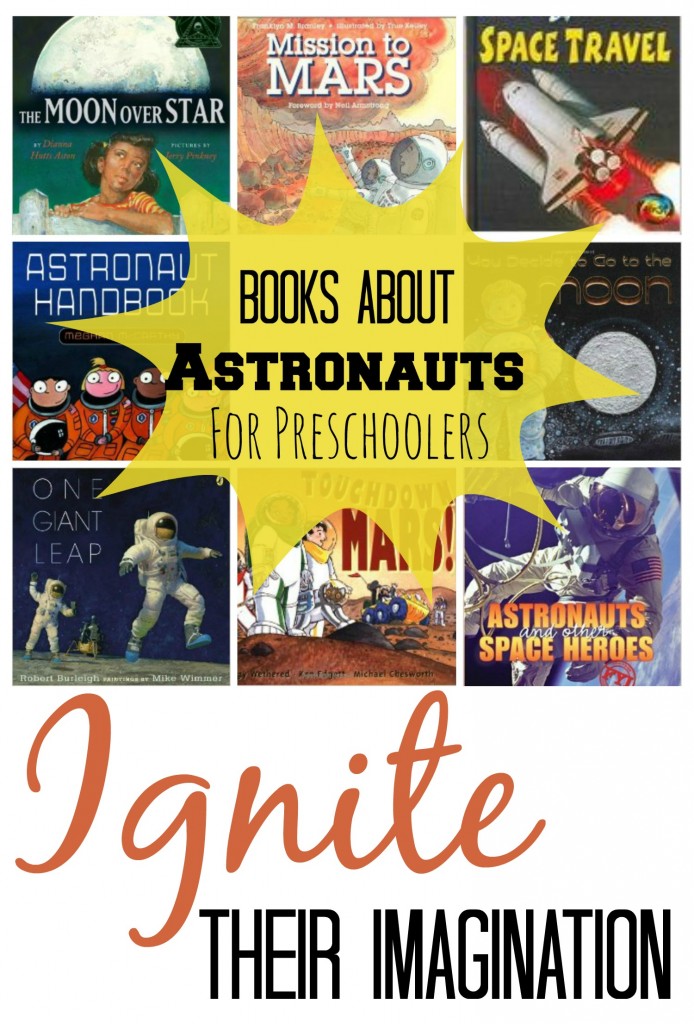 Astronauts and Other Space Heroes by Sarah Thomson

was full of so much information about individual astronauts and their astounding feats. While it’s geared toward grade school children, Loopy (3.5 yrs) loved it! The photography of the space ships as well as the cool personal stories really captured his imagination.

One Giant Leap by Robert Burleigh

recounts the first moon landing with flare. Get inside the astronauts minds and get lost in the beautiful paintings. Loopy wants to follow in Buzz and Neil’s footsteps.

The Moon Over Star by Dianna Hutts Aston

is another retelling of the first moon walk but from a more relatable perspective. Young Mae waits in great anticipation for the historic event. After reading this, Loopy asked older family members if they remembered where they were on July 20th, 1969. It helped him realize that some of his books are about actual events in history. He starting to catch on to the concept.

was an age appropriate non-fiction book that led the reader from early science experiments with rockets, to the full blown space programs of today. We learned so much from this book!

On the Moon by Anna Milbourne and Benji Davies (Sorry, not on Amazon) Cute book, written to the younger crowd. Both of my boys (18 mths and 3.5 yrs) enjoyed the cartoon like illustrations and simple text.

Zoom! Zoom! Zoom! I’m Off to the Moon! by Dan Yaccarino (Can’t believe this isn’t on Amazon) This was Lumpy’s FAVORITE! Simple rhyming text about a little boy blasting of into space and coming back a hero. Loopy memorized it. Yeah, memorized it. Which is good, because Lumpy wanted it read to him at least 30 times a day!

A bunch of kids take a trip to Mars. Each page highlights a letter of the alphabet. There is a simple line and then a larger paragraph to work with different age groups.

This was a fun book about well, a mission to Mars! Loopy and I learned a lot about what problems need to be solved before Mars missions will be feasible. It also facilitated discussions about difference between Earth and Mars. Oh, and there’s a foreword by THE Neil Armstrong

Spacecraft (What’s Inside?) by DK Publishing

Simple book that “peels back the skin” of space shuttles, space suits and lunar modules (among other things) I thought the text was perfect for a four year old fascinated with the subject.

Very similar to the above book, but more complex. All sorts of space exploration tools made transparent with interesting blurbs explaining how things worked. I know I learned a lot!

Well, those were our highlights. Check out all sorts of astronaut activities we did this month!

Are you homeschooling your little ones? Join our private Facebook support group where we get our questions answered and our hearts encouraged!