Inside you’ll find: my boys favorite chapter books we read this year. Most of them I’d say fit the category of living books!

2017 was the year we really started diving into chapter books. I’ve been dreaming about this stage in life since before I was married! Sharing fantastic stories and adventures within the pages of a book with my children is even better than I imagined. Here are our highlights from this year. We read a couple more, but they didn’t make the cut. 🙂 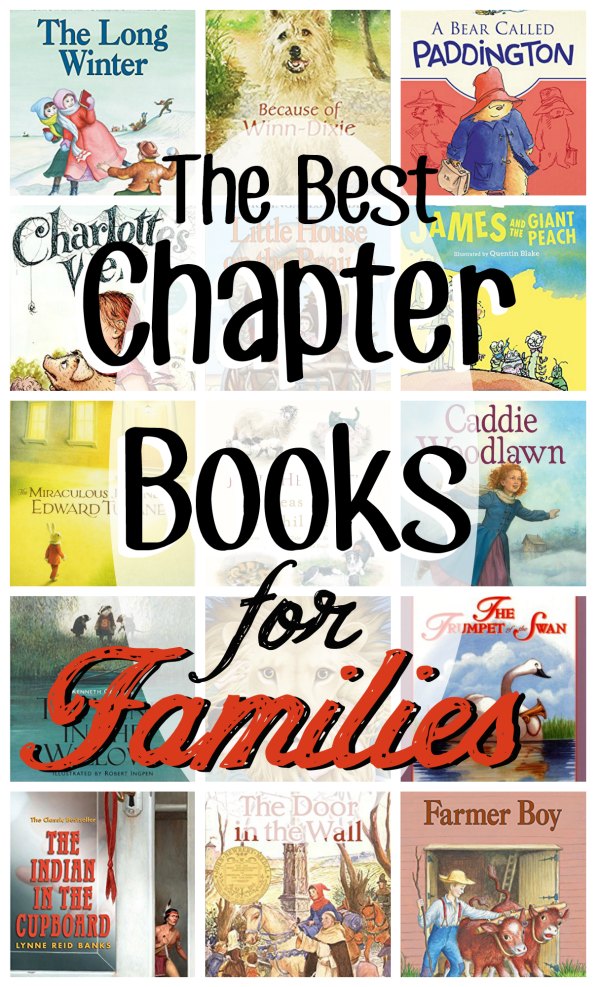 P.S. Wondering how the heck we read so many books when we still have a special needs toddler and bouncing boys? Mostly audiobooks friends. I can’t believe how many books we enjoyed together in the car or with Audible ( Try Audible and Get Two Free Audiobooks

) during quiet times! I only read about 20% of these aloud to them. The rest we listened to. I hope to shift that percentage as my youngest gets older, but you do what you got to do!

The Wind in the Willows by Kenneth Grahame

Ok, this one was my second favorite book this year. I beg you to get this copy of the book, the illustrations fit the beauty of the prose, which is no easy feat! And read it aloud. Language this beautiful isn’t meant to be read silently. It might take a awhile. It’s very rich, but the plot held my older son’s interest and I delighted in each morsel we read.

My Side of the Mountain by Jean Craighead George

The story of a boy who craves connection to the wildness of the forest. Goodness sakes my boys learned so much natural history and survival techniques.

by Richard and Florence Atwater

So many laughs! My three year old was all about this one and the wild antics of Mr. Poppers pets!

The Trailblazer series is a fantastic way of introducing your kids to famous heroes of the past in a living books sort of way. The plot is fictitious, but not far from the truth, and gives kids a look at this wonderful people from the past, through the eyes of a child.

This was the first chapter book I ever read on my own. It’s a bit of a mystery and full of lovely sibling relationships. My boys were literally bouncing as we read it!

The Cricket in Times Square (Chester Cricket and His Friends)

I randomly picked this one up at the library and it quickly became one of my favorites! A cricket makes beautiful music in the otherwise dreary downtown subway station. The interaction between the animals and the little boy who’s family owns the stand rivals the genius of E.B. White. 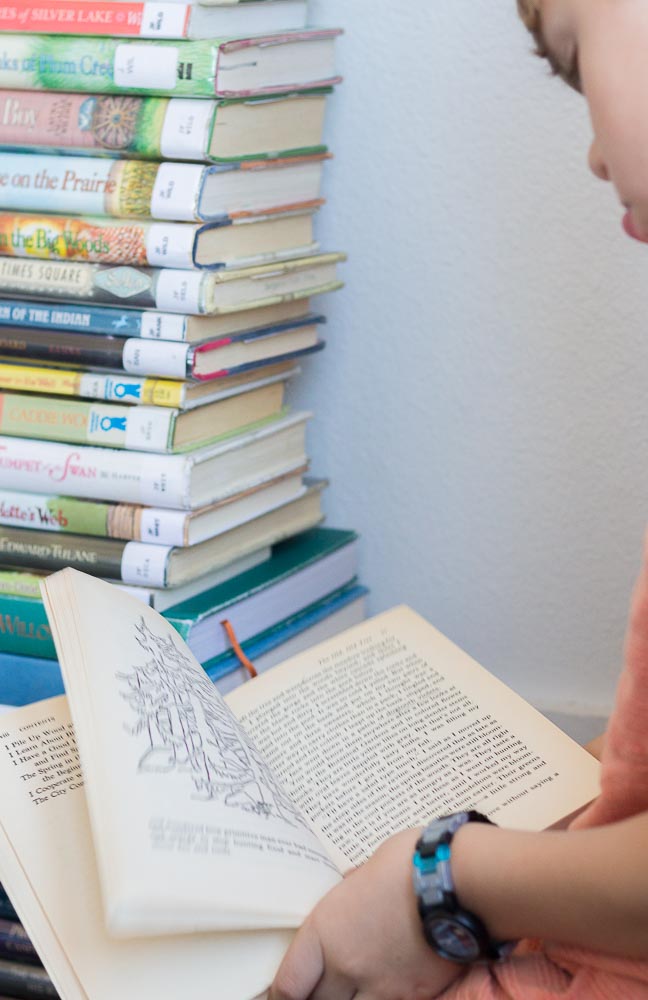 The Indian in the Cupboard

This is the book that got my oldest hooked on chapter books. The plot sucks you in and holds you tight till the end! What could be more magical that mini figurines coming to life???

The Return of the Indian by Lynne Reid Banks

The funny sequel to “The Indian in the Cupboard.”

The Door in the Wall

My boys listened to this one on their own and they were totally in to it! I asked them to tell me about it, and I got a good 20 minute narration about the boy destined for knighthood who loses the use of his legs, but still finds a heroic way to serve his king.

Little House in the Big Woods

The perfect start to the series. Good for even the youngest crowd.

Little House on the Prairie  by Laura Ingalls Wilder

The classic book about a brave pioneer family and their struggles.

When I ask my oldest what his favorite book of the year was, he quickly pointed to this one. The third book in the Little House series takes a break from following the Ingalls family, and instead introduces us to Almanzo Wilder. He’s such a related boy and parents would be hard pressed to find a better role model for their boys! When my boys realized the author shares a last name with him, the mystery kept them anxious for the paths to cross in each following book. 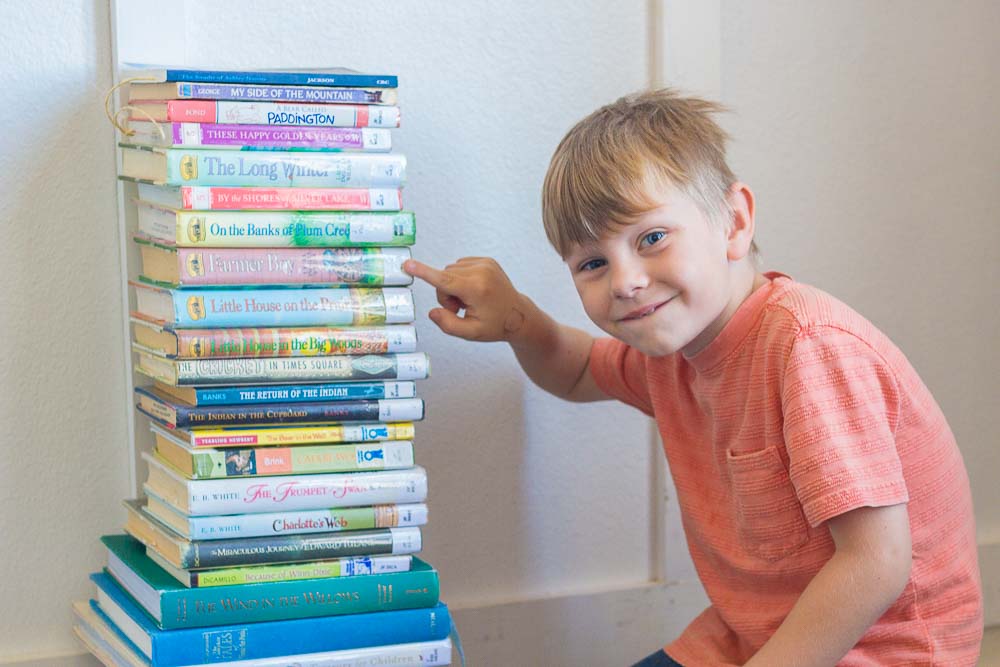 On the Banks of Plum Creek

Back to the Ingalls family and back for more adventures in a new homestead claim.

By the Shores of Silver Lake  by Laura Ingalls Wilder

This one wins as my favorite read aloud of the year. Wow wow wow. Such an incredible story of the sheer will to survive. The heroism, bravery, and hope of these pioneer families brings me to tears every time I think of it.

Little Town on the Prairie

We’re actually still finishing this one. But I just had to include the final book in one of the best series ever written.

A true story of a tomboy and her brothers adventures in the frontier of Wisconsin. Full of danger and excitement. If you like the Little House series (who doesn’t?), this is good choice to follow up with.

The Trumpet of the Swan by E. B. White

My new favorite E.B. White story. Louie the trumpeter swan is mute so he learns to play a literal trumpet and crave out a unique life for himself all over the country.

The classic tale of learning to love and let go. I can’t believe I cried at the end. I knew what was coming. I’d read it before. But goodness, it’s so flawlessly written!

The Miraculous Journey of Edward Tulane

A fascinating tale of a china rabbit doll who is living high and mighty as a favorite toy until one day, he is lost. He journeys for years and learn much about people and himself.

A strange dog gives a little girl courage to face all the hard things in her life. Sad and poignant.

The Complete Tales of Winnie-The-Pooh

So many gems and one-liners in this collection! Pooh and friends should be a staple of every child’s youth.

If you haven’t read anything by James Herriot, you’re missing out! True stories of a country vet in turn of the century England. You’ll laugh, you’ll cry and you’ll learn so much natural history and biology! Timeless stories that delight all ages.

James and the Giant Peach

Over the top hilarious and all sorts of whimsical.

Charlie and the Chocolate Factory

I’m not sure which my boys liked more, the quiet, obedient, kind underdog winning, or all the candy!

Five Little Peppers and How They Grew by Margaret Sidney

A heartwarming and exciting tale of a poor family with five lovable children.

Very related antics of a young boy and his dog. My boys laughed aloud the whole time. Easy to read for newer readers too!

The Mouse and the Motorcycle

Can’t get much cooler than a mouse with a motorcycle! My middle son LOVED this one!

A really fun prequel to the Narnia series! And the creation scene will stick in your mind forever!

The Lion, the Witch and the Wardrobe by C.S. Lewis

If you only read one of the Narnia series, this is probably the best, though they’re all so good! Lewis is a genius, there is no doubt.

The Horse and His Boy

The Voyage of the ‘Dawn Treader’ by C.S. Lewis

My personal favorite. Eustace and the dragon scene… Perfection!

The Silver Chair   by C.S. Lewis 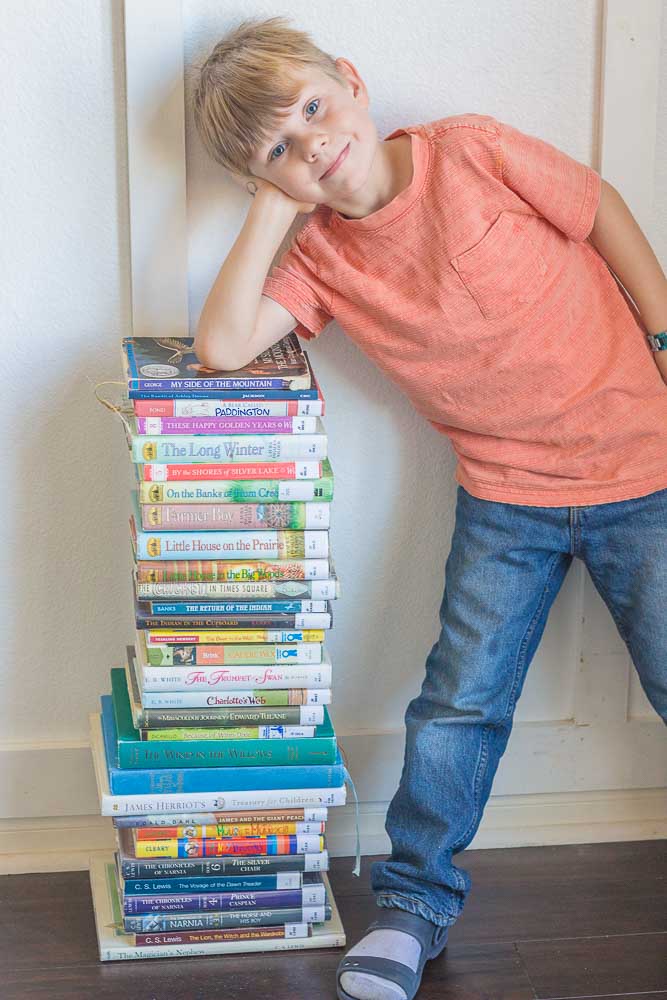