Inside you’ll find: 24 AMAZING living picture books about inventors and scientists that will engage your kids and inspire them to explore the world around them. (Make that 34 after adding some new favorites!)

We’re one of those crazy families that does school through the summer. But there’s a reason to our madness! It’s so hot that going outside is just not feasible for long periods of time. PLUS we take off LOTS of time in the winter to be able to enjoy the outdoors and the holidays.

This past summer, I was looking for a short topic to study in both science AND history. Then I thought, “Why not combine them?” Hence, our study of famous scientists and inventors.

As Charlotte Mason homeschoolers, we’re always looking for books that tell an engaging story. These living books live on in our minds and hearts, help us not just take in information, but the develop character. 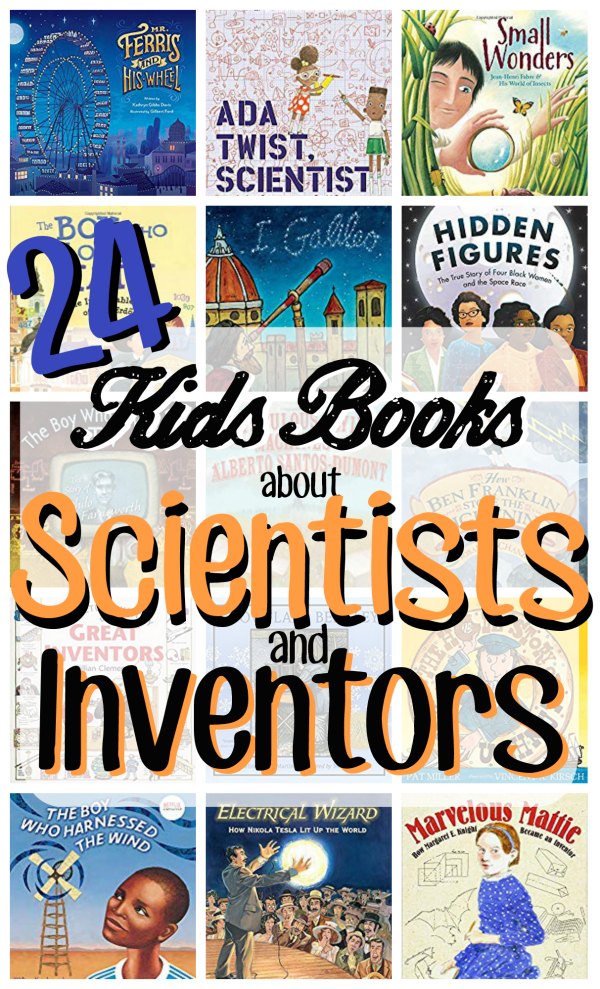 Picture Books about Scientists and Inventors:

The Gravity Tree: The True Story of a Tree That Inspired the World

This first book is unique in that it covers hundreds of years of history and how one discovery leads to more. Really fascinating! I had no idea!

Of Numbers and Stars: The Story of Hypatia

A really neat story about an ancient Egyptian woman who was a genius for numbers and astronomy as well as philosophy.

Even with the whole world against him, Galileo bravely look into the night sky to see what God had created. His story is one of courage that turned the world upside down.

I knew Leonardo da Vinci was brilliant, but I had no idea how many things he thought up WAY before they were invented. This book also reinforced the importance of keeping a journal.

An indepth look at the life of the man who revolutionized our understanding of physics. Cool to see what his younger years were like!

How Ben Franklin Stole the Lightning

Such a fun book! This book pairs nicely with the one about Tesla and a study of electricity.

Another fun story about the genius of Ben Franklin. No problem was too big or too small for Franklin to tackle.

Learn about the courageous man who strove to write a farmer’s almanac with accurate measurements and calculations. He also wrote a stunning rebuke to Thomas Jefferson on his views on slavery that have been preserved for young readers to see. Illustrated by one of the amazing Pinkneys, this book is not to be missed!

This book is GORGEOUS and won the Caldecott. When art and science come together, it’s awe inspiring! You’ll never look at a snowflake the same way again!

Small Wonders: Jean-Henri Fabre and His World of Insects

The french naturalist, Jean Henri Fabre sure had the habit of attention down! Amazing how just observing what’s around you can lead to big things!

The Vast Wonder of the World: Biologist Ernest Everett Just

We enjoyed learning about Dr. Just and his discoveries related to sea creatures! I thought it was noteworthy how many different fields he studied before finding his niche.

Evelyn the Adventurous Entomologist: The True Story of a World-Traveling Bug Hunter

Buzzing with Questions: The inquisitive Mind of Charles Henry Turner

This book will warm every teacher’s heart that wants to raise curious students!

A delightful book about the man who is considered the world’s first geneticist. This was basically our first introduction into genes, dominance etc and there was so much to glean from this gem of a book.

Electrical Wizard: How Nikola Tesla Lit Up the World

Fascinating story about Nikola and his battles with Edison over AC and DC current. We learned a TON about electricity.

Samuel Morse, That’s Who!: The Story of the Telegraph and Morse Code

A fascinating look at the self taught woman who kept the Brooklyn Bridge project running during her husband’s long illness.

The Girl Who Thought in Pictures: The Story of Dr. Temple Grandin

Awesome story about one of MY hero’s Dr. Temple Grandin who is autistic and leading the way in bringing about awareness and acceptance. Her brain is a gift! Great encouragement to kids that don’t fit the mold or think outside the box.

Hidden Figures: The True Story of Four Black Women and the Space Race

Follows the lives of four women that ROCKED at math and brought the US space program to new heights, despite prejudices.

The Boy Who Harnessed the Wind: Picture Book Edition

When a young man’s village suffers a drought and all the crops die, he doesn’t give up. Study library books and gathering materials from the dump, this heroic young man saves his people with his windmill. (Note: there is a full length novel of the same title that my boys gobbled up! Like read it three times in one week!)

Great story about a determined young girl who wouldn’t let other intimidate her! Nicknamed “Lady Edison” Ms. Knight’s story is not to be missed!

Did you know there’s a debate about whether the Wright brothers should hold the title for the first flight? Find out the story of Alberto Santos-Dumont and his incredible accomplishments to the field of aviation.

The Hole Story of the Doughnut

A whimsical story about the invention of the doughnut! What’s not to love! It reminds us that all sorts of things are invented for all sorts of reasons.

Mr. Ferris and His Wheel

Stunning illustrations highlight the story of the first Ferris wheel and the world’s fair. In this book we were reintroduced to other inventors of the time like Edison and Tesla.

The Crayon Man: The True Story of the Invention of Crayola Crayons

I’ll never look at a crayon in the same way again! Kids everywhere will cheer their gratitude for not having to use charcoal, paint, or pencils to create artwork.

Pop!: The Invention of Bubble Gum

Another fun one about perfecting the art of bubble gum. Warning: this book got my kids on a bubble blowing kick! 🙂

The Boy Who Invented TV: The Story of Philo Farnsworth

Very interesting book about an invention that changed the way the world relaxes. My boys think he’s a hero!

The Boy Who Loved Math: The Improbable Life of Paul Erdos

Fun book about a boy that made friends with numbers. The book highlights that even though we’re all different, we all have strengths.

On a Beam of Light: A Story of Albert Einstein

Einstein’s mother was told that her son was an idiot. I loved this book for the hope it brought to folks that don’t do well in traditional schools yet excel at thinking beyond the norm.

One of our all-time favorite picture books EVER! This is a fictional take on a true story about a man who tried to invent a submarine in Chicago’s Lake Michigan. The illustrations are vivid and hilarious! The father is never deterred by failure and his family is full of grace and good ideas! Absolutely LOVE!

Another fictional story that encourages kids to try crazy things and that failures are just stepping stones to success. I really enjoyed the rhyming text!

We didn’t read this one yet, but it’s by the same creators of Rosie Revere, so I expect good things!

This is a great reference book with over 50 inventors highlighted! Great introduction to whet a child’s appetite to explore the life of more inventors.

Fun collection of a bunch of women and their contributions and problem solving skills!

Do you know of any other picture books about inventors and scientists? Let me know in the comments below! We can’t have too many!