(Written in Feb. 2011)
It’s been a week since Loopy was born and I finally have found some time to get the events down on paper. I did not picture his birth going down the way it did, but the end result was still a wonderful healthy baby boy that is one of the greatest blessings I’ve ever received from God! As many of you know, I was hoping to have a natural delivery outside of a hospital at a private birth center. Before Loopy was even conceived, I’d done a ton of research on different birthing methods. I must admit, I’ve slowly turned into a hippy! While I don’t shun modern medicine by any means, I think the medical world causes problems when meddling with a healthy pregnancy and birth. Hospitals and OB/GYNs save lives every day and I’m so grateful for them. Unfortunately, the medical world often sees pregnancy as a sickness or an emergency waiting to happen. I believe that a lot of their interventions, stemming from fear, cause more problems than they solve. Anyway, that’s just a summary of why I chose to birth as naturally as possible. I felt it was  best for me and my son and was blessed with a very healthy pregnancy. 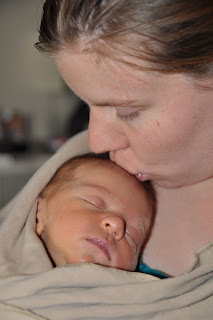