I love babywearing. It was one of the things about taking care of a baby that I was most excited about during pregnancy. I didn’t know much about it while I was still pregnant. So when I saw a “Baby Bjorn” at a garage sale, I hopped on it. I never even put Loopy in it. 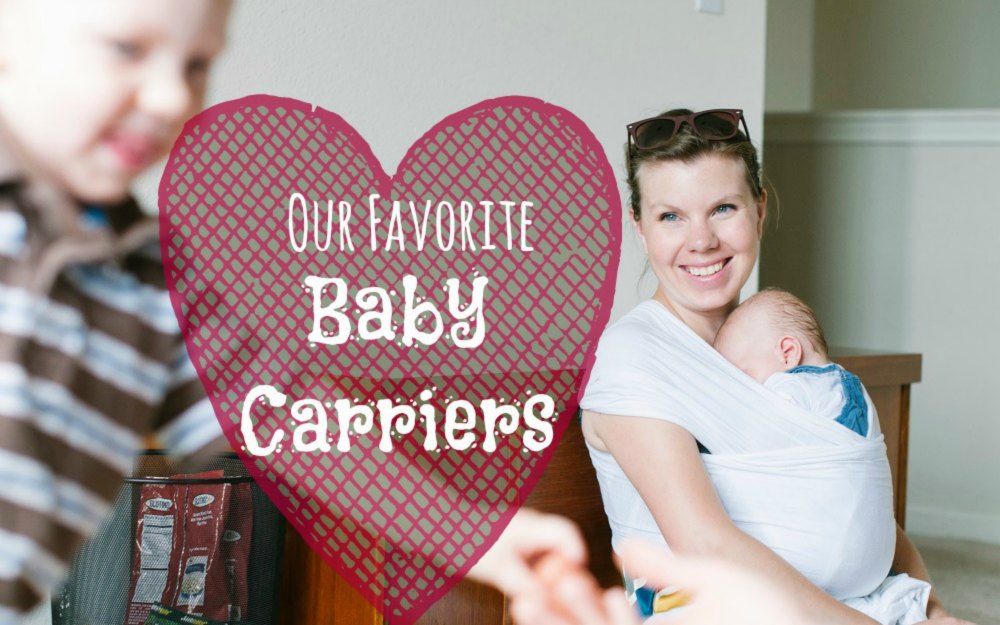 They’re just not comfortable. All the weight is on the shoulders, nothing on the hips. And most importantly, the design of the carrier causes the babies legs to hang straight down, verses wrapping around their parent’s waist. All of their body weight is on the hip sockets and can cause skeletal problems. Yuck!

Then I got suckered into one of those “free” slings where you just have to pay shipping and handling. We got some use out of it, but only a couple weeks. Then I had an unfortunate incident when I couldn’t get him out of the sling! It was just so tight! How embarrassing!

A great all-around baby carrier is the Moby Wrap. 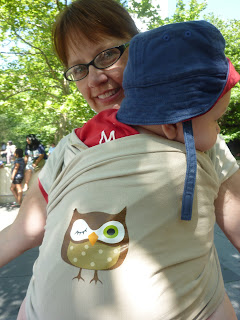 I was given a used one as a gift and it saw a lot of use from me too! Some of the pluses are how secure the baby will feel. You can make it as tight as you’d like. It’s also the most comfortable. It’s crazy how the weight of your baby practically disappears when he’s glued to you. When you’re wearing your child for a couple hours, it’s nice that you can move the “straps” around on your shoulders to shift the weight around and such. I also love that there are so many holds to chose from. If your child doesn’t like being worn in one  position, just switch it up. My son is very particular and changes his mild all the time, so this made the Moby a great choice. A lot of people complain that wraps are hard to learn and super huge. I practiced twice before inserting the baby, and it’s been a piece of cake since. My 5 ft. tall mother enjoys this carrier the most. My brother even used it with Loopy a couple times!

There are some down sides to the Moby. It can get pretty hot with all that fabric, snuggled up to a little one. It’s also a pain to put on in a dirty public place (ie grocery store) because the ends drag on the floor while you’re wrapping. I also felt like as Loopy neared 20 lbs. that he’d start sagging down after 20 mins. of use. (That could be because it was a used carrier. It’s supposed to hold up to 40 lbs.) Update: I ended up trading my Moby in for a “Lovely Duds” Wrap (find it on Etsy). It’s made of organic bamboo so it’s perfect for this Texas heat. Best carrier for the early months with Lumpy.

My other go to carrier when Loopy was younger was the Balboa Adjustable Sling by Dr. Sears 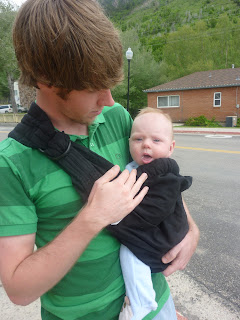 I really wanted an adjustable sling because I didn’t want to get stuck again. The sides are stretchy so this one is super easy to get the baby in and out. (like 5 seconds!) There’s a lot of controversy about these deep pocket slings. Check the web. Be sure you know how to place your baby in them so as to avoid any airway blockage. I was really nervous about those risks, so I rarely put him in a cradle position. He was getting to the age where he could sit on our hip, and it’s a great sling for that hold. I still will use this carrier/hold with Loopy now that he’s 15 months! Here he is with Daddy, just 4 months old.

Now to my all time favorite carrier. I felt a little silly getting another carrier when the Moby and the Balboa Adjustable Sling worked so well. While the Moby is super comfortable, it’s not convenient to get the baby in and out quickly, and Loopy was crawling and wanted to be up and down all the time. The Sling is great and getting in and out of, but the one shoulder hold was just getting too uncomfortable for any extended period of time. So I’m pretty sure I found the best of both worlds. It’s the Angel Pack….dah dah! 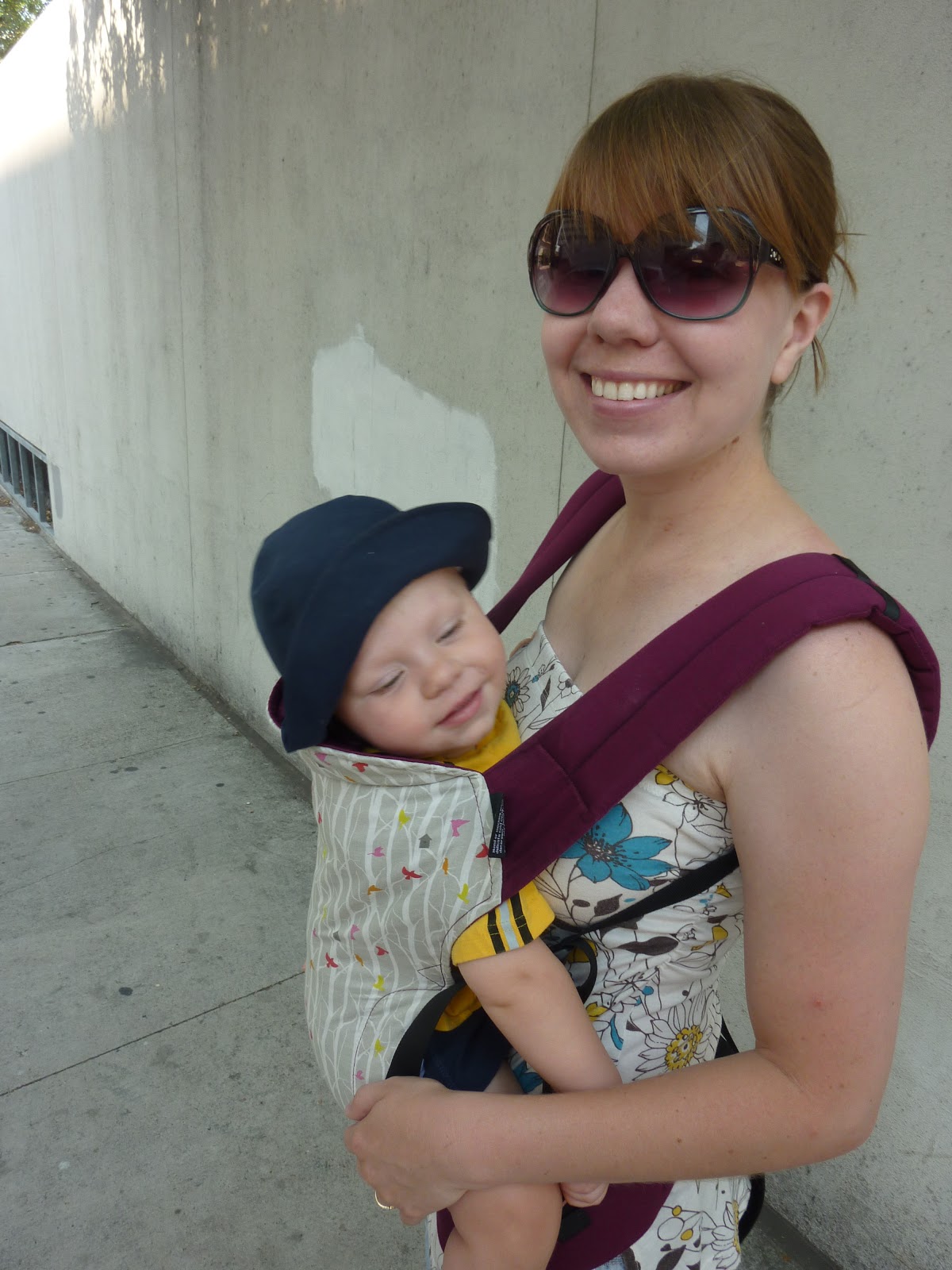 It’s a wonderful Soft Structured Carrier. Almost all of the weight is in my hips. Loopy sits in it instead of hanging by it. And best of all, it takes 15 seconds to get him in. I LOVE it! Andy got it for my birthday in October (it’s rather pricey) and I use it all the time even though Loopy’s entered the running stage. It’s for 10-40lbs.
(Update: I have used this carrier almost everyday for two years and just love it to pieces! My second born, Lumpy weighed enough at birth to get started in this, but I wanted to wait till he wasn’t quite as floppy.  Lumpy’s almost a year now, not walking and at least 25lbs so this carrier is a life saver! Loopy, now three, still gets in this on occasion and it’s still comfortable!)

With the last three carriers, I’d say I’m super covered in the babywearing department. Let me know if you have any questions or check out www.thebabywearer.com/

This post is part of a HUGE series filled with tons of other bloggers tips and tricks to live a green, natural lifestyle. You’ve gotta check it out, especially since you can win some sweet products! 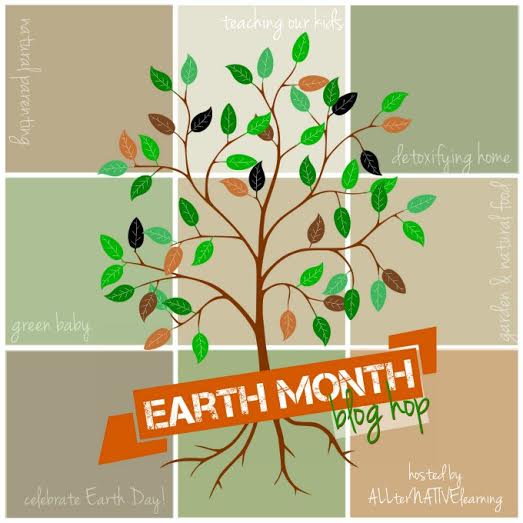