Inside you’ll find: Children’s Books about the Civil War Era, including sections about slavery and the underground railroad, abolitionists, Civil War soldiers and helpers, Civil War generals and politicians, as well as Juneteenth.

Teaching students about our nation’s Civil War is sobering. Slavery and the battle to finally end it, has left scars. 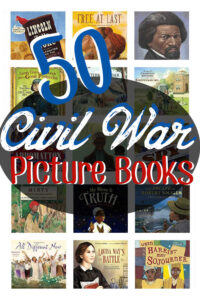 Books about the Underground Railroad and the Enslaved Experience

The Listeners by Gloria Whelan

Listening in on the masters helped the children know who was in danger of being sold away from their family. Told from the tender point of view of an enslaved child on a plantation, this book gently helps its readers step into the shoes of what life under slavery was like.

Accurate about hardships without being overly violent, this book follows the journey of a family of five who are aided by Harriet Tubman in their escape from Kentucky to Canada.

The incredible true tale of the lengths enslaved people would go to be free, including mailing children in a “large” postage box. Gorgeous illustrations.

Daring to impersonate a Confederate boat captain, Robert Smalls pulls off one of the most audacious escapes. Fascinating tale!

The Daring Escape of Ellen Craft by Cathy Moore

An amazing true story of how Ellen Craft posed as a white man traveling with a slave (her husband) in a desperate attempt at freedom.

Rhythmic writing chronicles the way slaves would memorize a song about the Big Dipper AKA Drinking Gourd and use it as a signpost to freedom and the North.

Barefoot: Escape on the Underground Railroad by Pamela Duncan Edwards

Another perilous tale of fleeing slavery, using the instincts of wild animals in the dark.

When her father enlists in the Union army, Hope has legitimate fears. Follow her journey through the war, the Emancipation Proclamation, and her longing for her father to come home safe and free.

Picture Books about Abolitionists for Kids

Before She Was Harriet by Lesa Cline-Ransome

Captivating illustrations and lyrical words showcase the many roles (and names) that Harriet Tubman had and they way they shaped her, and subsequently, our world. A MUST read!

Moses: When Harriet Tubman Led Her People to Freedom by Carole Weatherford

One of Harriet’s many names was “Moses” and for good reason. This book highlights the calling of God on Harriet’s life and how He was with her every step of the 19 journeys she made back and forth to freedom.

Minty: A Story of Young Harriet Tubman by Alan Schroeder

This book focuses on the early years of Harriet Tubman’s life. Engaging pictures are illustrated by the iconic Jerry Pinkney.

Shifting back and forth between the two strong women, this book shows the similarities and crossing paths of these two giants of the abolitionist movement.

My Name Is Truth: The Life of Sojourner Truth by Ann Turner

Told from Ms. Truth’s point of view, this extensively research book will introduce you to a woman who lived up to the name she gave herself.

So Tall Within: Sojourner Truth’s Long Walk Toward Freedom by Gary D. Schmidt

This picture book is written by the famed novelist Gary D. Schmidt. (Check out his book “Ok for Now”). Powerfully describes an instrumental American figure while the illustrations “paint difficult scenes with gentleness and strength.”

Another take on Sojourner Truth’s life, highlighting that even when she herself was free, she wasn’t content until all were free.

Words Set Me Free: The Story of Young Frederick Douglass by Lesa Cline-Ransome

I LOVE when books focus on the early life of famous people. How inspiring to our kids! For Frederick Douglass, this book makes clear that his life and principles were shaped by reading truth.

Bread for Words: A Frederick Douglass Story by Shana Kelle

Taking a step even further back, this story shows the determination and lengths young Douglass went to to learn how to read. He wanted his questions answered!

Frederick’s Journey: The Life of Frederick Douglass by Doreen Rappaport

This series does a fantastic job of portraying a life by quoting the individual, and specifically, Frederick Douglass. And of course I’m a sucker for the dramatic illustrations!

Did you know Douglass and Susan B. Anthony were friends? See how these two teamed up to fight for the rights of oppressed Americans in this informative book.

Friends for Freedom: The Story of Susan B. Anthony & Frederick Douglass by Suzanne Slade

Despite different worlds and sometimes different opinions, Anthony and Douglass joined together to make our country more equitable. Another take on the powerful friendship.

If you’ve read “Little Women” by Louisa May Alcott or seen any of the movie adaptations, you know that the story was set during the Civil War and includes dramatic war efforts. This is the fantastic story behind the work that lives on in the American imagination.

A Picture Book of Harriet Beecher Stowe by David A. Adler

Stowe’s book “Uncle Tom’s Cabin” sparked an uproar in America over slavery more effectually than any speech or plea before it. Learn about the author’s life and what drove her to write it.

Picture Books about the Civil War Effort of Soldiers and Helpers

A gripping story of an 11 year old bugler who must takes his task seriously at the battle of Gettysburg. As if that wasn’t enough, his last living brother is fighting in the battle. Then he meets a southern bugler and a friendship blossoms.

Seeing the Elephant: A Story of the Civil War by Pat Hughes

This story finds a brother attending to his wounded older brother. While there, he meets the enemy and finds the humanity in him.

Pink and Say by Patricia Polacco

No one can tell a tear-jerker like Patricia Polacco. And this one, like most of her books, is based on the true story of two union soldiers caught behind enemy lines. Simply beautiful.

The Yankee at the Seder by Elka Weber

After the war has ended, a southerner boy is struggling to move on. When a Union soldier asks to join their Passover celebration, bonds and understanding blossom.

Marching to Appomattox: The Footrace That Ended the Civil War by Ken Stark

A child-friendly in-depth look at the how the Civil War finally ended. Very well researched with engaging illustrations.

An incredible true story of a 19 year old woman who enlists in the Union army, fooling everyone into thinking she’s a man. She excels as a soldier, treats the wounded as a nurse, and eventually becomes a spy!

Sarah Emma Edmonds Was a Great Pretender: The True Story of a Civil War Spy by Carrie Jones

Another take on the life of Sarah Edmonds. She was QUITE the actress! Humorous  illustrations.

Mary Walker Wears the Pants: The True Story of the Doctor, Reformer, and Civil War Hero by Cheryl Harness

The amazing true story of a female doctor during the Civil War. Mary Walker is the ONLY female recipient of the prestigious Medal of Honor.

The Silent Witness: A True Story of the Civil War by Robin Friedman

This book highlights some of the ways the war touched everyday life. From the perspective of a young girl who’s home is overtaken by soldiers.

The Cemetery Keepers of Gettysburg by Linda Oatman High

The true story of a family whose own land turns into the battle of Gettysburg. The Thorn family tends the cemetery in the quite Pennsylvania town. After their world gets turned upside down, they make every effort to honor those fallen on every side. So poignant.

Loyalty and bravery aren’t reserved just to the human soldiers. Read how Sallie became an instant comrade and faithful companion for a group of Union soldiers.

An interesting perspective on the role music played in the war, giving instructions, preventing boredom, and offering hope. Interspersed with soldiers letters and journal entries.

Picture Books about Political and Military Leaders During the Civil War

Before Ulysses S. Grant Was President by Mark Harasymiw

This biography on Grant focuses on his time before his presidency, mainly as the top general in the Union Army.

Many great General’s rode into victory on the back of equally heroic steeds. Ulysses S. Grant was no exception, using his trusted “Cincinnati” in the heat of battle.

This isn’t a storybook as much as a well laid out children’s non-fiction book about the whole of Grant’s life.

I wanted to include biographies about confederate soldiers and leaders, not to celebrate their misguided choices, but to see their humanity and learn from their strengths and shortcomings.

A Picture Book of Robert E. Lee by David A. Adler

This is always a great series, so I was excited to see that Adler tackled the life of Robert E. Lee, a complicated man.

If you haven’t read a d’Aulaire book before, drop everything and read these nostalgic masterpieces. These books deserve the title of “classic”.

Ms. Harness is quickly becoming one of my favorite non-fiction writers! She has teamed up with National Geographic numerous times and each one that we’ve gotten our hands on has been a hit. This book in particular focuses on Lincoln’s early life.

The sequel to the book above focus on Lincoln’s presidency.

Honey, the Dog Who Saved Abe Lincoln by Shari Swanson

When young Abe rescues of pup, little does he know that that dog will one day save his life. Well researched glimpse into Lincoln’s childhood and the providence of God over his life.

Lincoln Tells a Joke: How Laughter Saved the President (and the Country) by Kathleen Krull

So many biographers discuss how Lincoln’s humor was a life line to him during the horrors of the war years and tragedies that befell his family. This book brings that topic to the students’ level while lifting up joy in the midst of sorrow.

A picture book on the life of our famous president with plenty of quotes from him interspersed.

Picture Books about Juneteenth for Kids

All Different Now: Juneteenth, the First Day of Freedom by Angela Johnson

Lovely illustrations showcase the joy of the first Juneteenth for the formerly enslaved of Texas. Helpful notes in the back fill in more history.

Juneteenth for Mazie by Floyd Cooper

Excellent explanation of Juneteenth as young kids learn alongside Mazie what this day is all about.

The Juneteenth Story: Celebrating the End of Slavery in the United States by Alliah L. Agostini

An honest look at the delays and injustices prior to Juneteenth. From the perspective of a modern day family.

Free at Last: A Juneteenth Poem by Sojourner Kincaid Rolle

Moving poetry. Equally moving art. All kids should be exposed to poetry and all kids should know about Juneteenth. Read it and you won’t be disappointed.

Opal Lee and What It Means to Be Free: The True Story of the Grandmother of Juneteenth by Alice Faye Duncan

Set in modern times, Opal Lee explains what Juneteenth is all about and her role in establishing it as a holiday.