Inside you’ll find: Tons of picture books about World War Two for Kids.

When approaching a difficult topic with young kids, my go to method for starting a conversation is to read a picture book aloud to them. Wars are obviously scary and complicated. But no study of history would be complete( and I would argue, no human would be fully educated) without an understanding of the evil and heroics that are revealed in war. The good and the bad is displayed in powerful leaders as well as the common people. 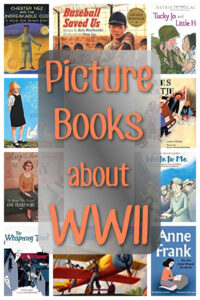 Grab this book to showcase how everyday children and families contributed to the war effort in BIG ways! The true story of how Diana Hopkins started her own Victory Garden on the White House lawn under the tutelage of  First Lady Eleanor Roosevelt.

This fictional story about a girl’s quest to grow a Victory Garden highlights the ways in which gardening can aid in healing a broken heart torn apart by the tragedies of war.

Follow the life, passions and heroics of one incredible member of the Tuskegee Airmen. Superb illustrations!

The Girl Who Could Fix Anything: Beatrice Shilling, World War II Engineer by Mara Rockliff

Another true story about aviation during World War II, this time over in Great Britain. Beatrice Shilling fixed planes and broke barriers in her war efforts for the Allies.

Despite being told in boarding school to forget his Navajo culture and language, Chester Nez, and others from his tribe were recruited during World War II to use their mother tongue to create an “Unbreakable Code” essential to the war effort.

The Fearless Flights of Hazel Ying Lee by Julie Leung

Read about Hazel Ying Lee and her role in the Women Airforce Service Pilots. An adventurous and fearless Chinese American heroine.

Discover the “dogs for defense” program that trained at Fort Robinson War Dogs Training Center in western Nebraska. Seen through the eyes of one brave and loyal dog “Major”.

This book tells the story of “The Day that Will Live in Infamy” from 16 different (fictional) people’s perspectives. Both US and Japanese soldiers, politicians, mothers, nurses, Hawaiian locals and more.

Baseball Saved Us by Ken Mochizuki

Inspired by true events, this modern-day classic explores the stark realities of internment camps in the States, and the simple yet profound pleasure and hope that sports can bring.

Fish for Jimmy by Katie Yamasaki

Brotherly love and sacrifice are showcased in this book, based on the author’s lived experience. Lovely!

Write to Me: Letters from Japanese American Children to the Librarian They Left Behind by Cynthia Grady

Clara Breed encourages her Japanese American library patrons to write her when they are removed from the normal lives and placed in internment camps. There are actual excerpts from these letters within the book.

The Butterfly by Patricia Polacco

From the prolific and profound Patricia Polacco comes the story of Monique, a young French girl who discovers another child using her basement to hide from the Nazis.

The Greatest Skating Race: A World War II Story from the Netherlands by Louise Borden

Read about the daring plot of three children, determined to skate their way to freedom from the Nazis.

A young German girls watches the war and it’s changes play out in front of her as she gazes out her window. Eventually she leaves her home and discovers the biggest tragedy yet, a concentration camp.

Boxes for Katje by Candace Fleming

Based on the author’s mother’s life, this story shows the comradery of two young girls  and their nations (America and Holland) after World War II leaves Europe in tatters.

Mercedes and the Chocolate Pilot by Margot Theis Raven

An incredible true story of the Berlin Airlift that brought supplies to West Germany after the war. Gorgeous and inspiring!

Picture Books about the Holocausts for Kids

Anne Frank: The Girl Heard Around the World by Linda Elovitz Marshall

I don’t think it’s a stretch to say that Anne Frank’s diary is the most famous in the whole world. This picture book is a developmentally appropriate way of showing children the world that Anne Frank lived in and changed for the better.

Miep and the Most Famous Diary: The Woman Who Rescued Anne Frank’s Diary by Meeg Pincus

This is the awe inspiring story of the woman who hid Anne Frank’s family from the Nazi and spared her diary from destruction.  Fascinating!

The Whispering Town by Jennifer Elvgren

A fictional story about a family that hides a Jewish family in Nazi occupied Denmark. A great way to introduce young children to the Holocaust. It encourages character qualities like empathy, courage and protectiveness.

Jars of Hope: How One Woman Helped Save 2,500 Children During the Holocaust by Jennifer Rozines Roy

A defiant woman, Irena Sendler, took it upon herself to save over 2,500 children in the ghettos of Warsaw. Highlight these everyday heroes who helped amidst atrocities.

The Harmonica by Tony Johnston

Inspired by a true story, this tale follows a young boy, sent to a different concentration camp than his parents, as he clings to music and hope.

A Queen to the Rescue: The Story of Henrietta Szold, Founder of Hadassah by Nancy Churnin

Tells the story of the formation of the Jewish women’s social justice organization, Hadassah and it’s role in protecting and aiding Jewish during the war.

Based on the true story of a FIFTEEN year old Kentucky solider who befriends a local young girl in the south pacific. They don’t share a language, other than kindness.

My Hiroshima by Junko Morimoto

With little text, but moving Japanese style prints, this is the story of Hiroshima from a child’s point of view. Despite the horror, there is hope.

The Peace Tree from Hiroshima: The Little Bonsai with a Big Story by Sandra Moore

A bonsai tree lives and witnesses hundreds of years of Japanese history before being given to the United States as a sign of healing and unity.

An incredibly moving true story of forgiveness, 20 years in the making. A MUST read! 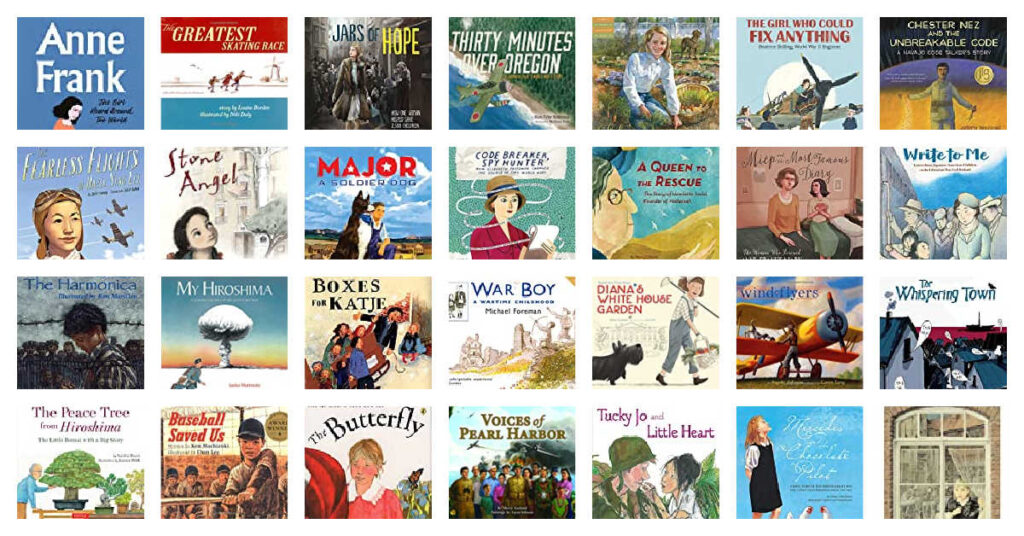