Inside you’ll find: Our personal Right Start Math review and why we think it’s the best homeschool math program around. If you’re on the lookout for homeschool curriculum for dyslexia or need something that is sensory friendly, you’ll want to read this review!

When I think back on my homeschool math curriculum as a kid, I instantly get sweaty palms.

Dull textbooks, endless worksheets, and an overall sense of doom because I had no idea what was going on!

Now that I’m homeschooling my own kids, I knew I needed to pick a better math curriculum, if not for my boys, then at least so that I could be able to teach it!

I had three requirements.

The best math program had to be:

RightStart Math fits those requirements and SO many more!

(HEY THERE! We’ve been using Right Start Math for three years now! After reading this post, click over to see our updated review. Spoiler alert: we still LOVE it!)

Dr. Cotter, who created the Right Start math curriculum, was greatly impressed by the Japanese education system, especially when it came to mathematics. And rightly so, as the Japanese consistently score among the highest ranked countries in the world.

Noticing how the Japanese school systems de-emphasized counting and introduced concepts in a very different order than American schools, Dr. Cotter knew she had to spread this approach in the US.

When I say that Right Start Math de-emphasizes counting, I mean that numbers are not memorized in a list order, divorced from their physical meaning. Instead, children are encouraged to visually recognize groups of five so that large sums can be added quickly, especially on their classic tool, the abacus.

I know my son can’t be the only one that struggled with the names of the teen numbers. Right Start Math has a brilliant solution that grounds kids in the ideas BEHIND the numbers’ name. They use regular names AND math names for the numbers, starting with the math names first. Just like in the Japanese language, twenty three becomes two tens three. Or eighteen is one ten eight. And 76 is called seven tens six.

And folks, this approach made place values a breeze! We used to hit a brick wall every time we had two digit numbers or more (because my son has dyslexia and would struggle with number order). But once we switched to Right Start, he was finally able to move on and catch up to his peers. Hallelujah!

Right Start introduces mathematical concepts in an unconventional order. For example, factions are introduced in Kindergarten because studies have show that younger students readily accept that 1/8 is less than 1/2. Yet, if students are unaware of written fractions until later, they may struggle with the concept. Everything is backed by research and makes so much sense! 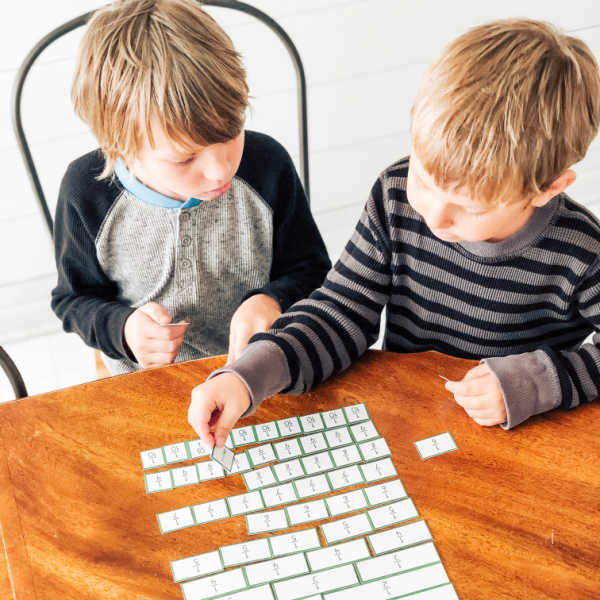 Hands On and Sensory Friendly

Because I have boys, because they have sensory issues, and frankly, because they’re kids, I knew our homeschool math curriculum had to be all about kinetic learning and tactile manipulatives.

Right Start Math does not disappoint. We got the “RS2 Math Set” so that we’d have EVERYTHING we’d need for all the levels as the years go by. Even though I have multiple kids using Right Start, the only thing I got doubles of was the abacus, since we often do math together.

Dr. Cotter says, “A good concrete manipulative is one that a child will internalize, so that it becomes available for the child to use in her imagination.“

One of my favorite math manipulatives from Right Start is their “Math Balance” which made the concept of a balanced equation literal!

No Right Start math review would be complete without talking about the treasure trove that is their “Math Card Games book”. There are 300 (yes that’s three HUNDRED) cards games that cover topics like

There are so many benefits to playing games, but mostly, it combines practice with pleasure and eliminates anxiety, helping the brain retain the information better. While there are the occasional worksheets with Right Start, the majority of math practice happens through games! 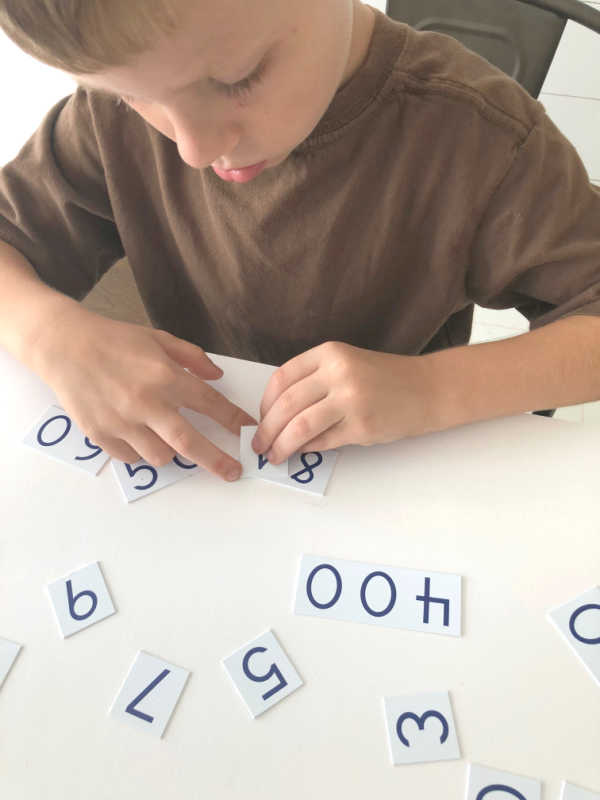 Since my boys have learning disabilities, I love that there’s very few worksheets requiring them to sit still and do fine motor skills. Those days will come, but in the mean time, they can still excel at math!

I’m not a planner. I need a homeschool math curriculum that’s just “open and go.”

Each Right Start math lesson is scripted, yet easily scannable. All you have to do is gather the required materials from the list before each lesson (it’s usually just the abacus and some other manipulative or tool) and then just read the lesson aloud to your kids. There’s notes in the margin about common mistakes or errors in a child’s thinking that I have found very helpful.

The lessons don’t take long either. As Charlotte Mason homeschoolers, we try and keep lessons quite short. We’ve been able to get most lessons done in about 10 mins. If the kids are still eager to do numbers, we play a math game afterward. It’s wonderful and keeps it from becoming a chore. 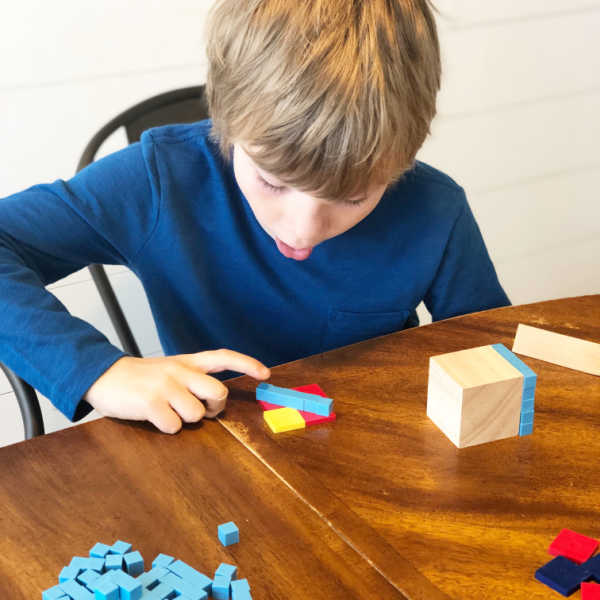 So tell me, what are you looking for in a homeschool math curriculum? Do you have any questions about Right Start Math? Let me know if the comments below and I’ll try my best to answer them!

(HEY THERE! We’ve been using Right Start Math for three years now! After reading this post, click over to see our updated review. Spoiler alert: we still LOVE it!)