I’m super excited and blessed to have Emma from Adventures of Adam guest posting for me today! She certainly knows what it’s like to have a tough pregnancy and she has dedicated her blog to SIMPLE activities for kids that even moms who are under the weather can do. I so appreciate her generosity in doing this post for me! Be sure to check out her site and follow her on social media!

We love sensory bin play over at Adventures of Adam. They provide opportunities for my son to explore his senses and to practice his fine motor skills. We have started to extend our sensory bins to include an additional educational element. Our latest activity is the Spell-A-Star Sensory Bin. 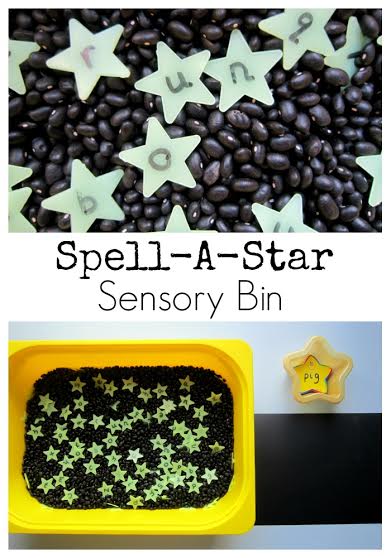 As my son is very confident at recognizing letters of the alphabet I wanted to make a sensory bin from which he could form three letter words. To create our night sky sensory bin I placed 1KG of Black Turtle Beans into a yellow Ikea Trofast storage box.

To make the letters I purchased 100 small glow in the dark stars. Using a permanent marker pen I wrote a different lowercase letter onto each star. I wrote out the alphabet twice, made five stars for each of the vowels and did additional stars for the letters s, t, p and n. The glow in the dark letters were hidden in the black turtle beans sensory bin. 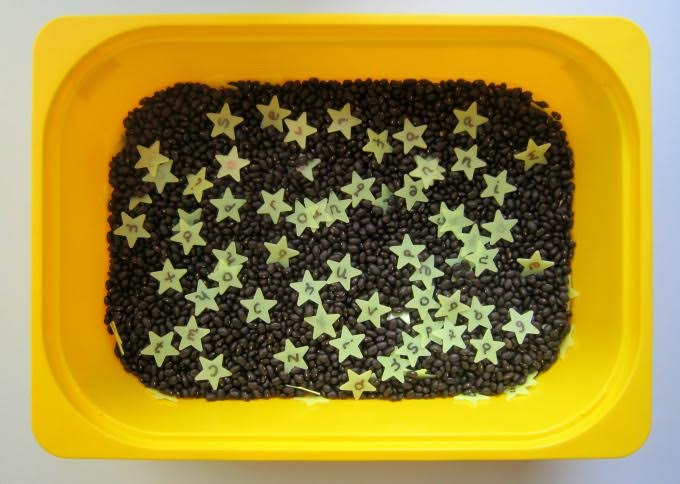 Again using the permanent marker pen I wrote a variety of consonant-vowel-consonant words onto Carson-Dellosa mini cut-out stars. I made sure I only used CVC words that Adam was familiar with. I wrote out 36 words and placed the CVC words into a star container. Finally I placed a sheet of black card next to the sensory bin for Adam to put his letters on. 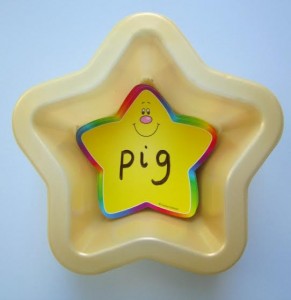 Adam took to the activity straight away. He picked out a three letter word star and placed it onto the black card. He told me which letter he needed first and then started to search for it on the glow in the dark stars. With hindsight I shouldn’t have placed so many stars in the sensory bin. Adam became distracted with telling me each letter he could find! However, it didn’t take him long to find the letters needed to create p-i-g.

Adam returned to the Spell-A-Star sensory bin many times over several days. He enjoyed locating the individual letters and placing them onto the black card to create a three letter word.

There are many ways that this activity could be adapted:

* To simplify the play I would only hide the three letters in the sensory bin that are needed to create the chosen word. This way your child focuses on identifying the three letters and placing them in the correct order on the card to form the word.

* Digraphs (two letters to make one sound) could also be written onto the glow in the dark stars. This will open up many more word combinations that could be used within the activity.

* To extend the Spell-A-Star Sensory Bin four or five letter words could be written onto the Carson-Dellosa mini cut-out stars. 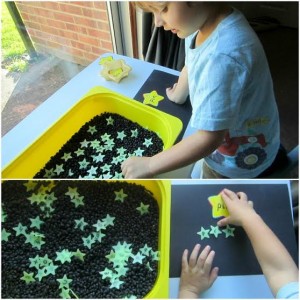 During a difficult pregnancy suffering from Hyperemesis Gravidarum (HG) Emma vowed to make every day an adventure once she had recovered. Adventures of Adam is the outcome of completing a 100 day play challenge with her toddler as part of that promise. Emma has a section dedicated to HG friendly play activities so that Mums can still be part of their children’s play whilst they are ill.