Inside you’ll find: How to Teach an Autistic Child To Swim, or a Child with Sensory Differences

As a lifeguard in high school, I literally taught hundreds of kids to swim.

The tough cases were always given to me.

I didn’t meet my match until I tried to teach a child who shared my DNA.

My son and his sensory issues seemed to be the one kid who I would fail to teach to swim.

While it did take longer than I ever could have imagined, we are finally at the point where I can declare, “The boy can swim!“

Since his sensory issues showed up strong in our learning to swim journey, I wanted to share with you some of what I’ve discovered. I hope you find it helpful!

Swimming is an essential life skill that demands a lot of the different sensory systems.

There are of course tactile issues, from the suit, to the water temperature, to the chlorine drying out the skin.

There are auditory issues, like the disorienting echos of an indoor pool or the pain of getting water in the ears.

While the pressure of the water on the body does provide some extra proprioceptive input, it can also be very alarming to kids that have poor body awareness.

When you consider that foreign floating feeling also messes with the vestibular system (the inner ear that signals to the body that you’re moving or up high) then it’s easy to understand why kids with sensory issues find swimming to be terrifying.

So here’s some of the things you can do about it! 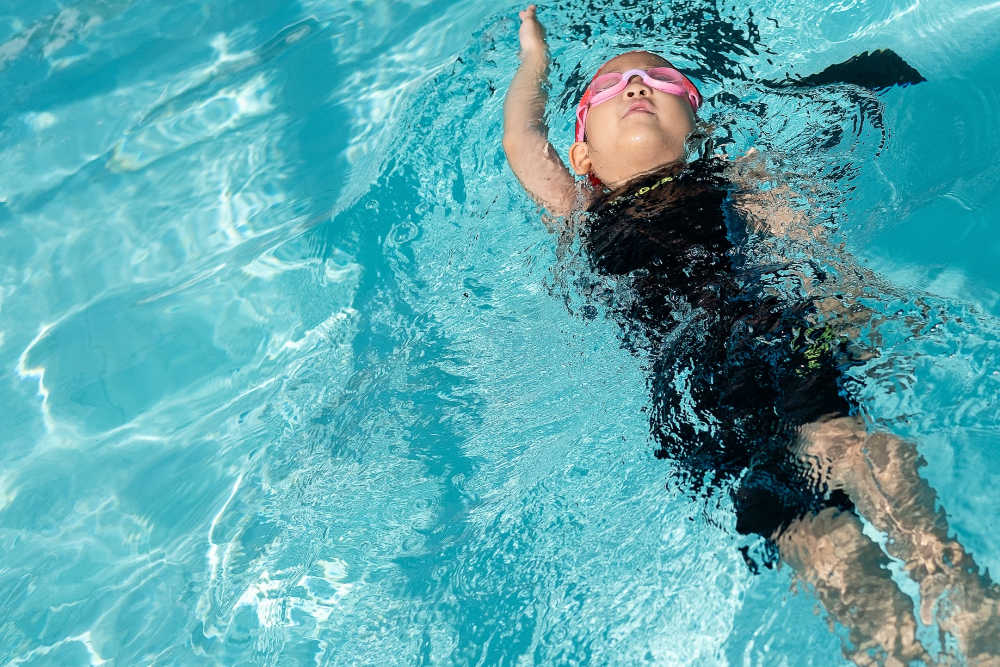 Think through the temperature of the water and air and try to help your child be comfortable. Obviously not everything can be controlled, but if they’re freezing, you’re not likely to have a very compliant child! Trying going indoors, or even work on getting the face underwater in the warm bathtub. Perhaps a wet suit is an option.

This was a big deal to my son. Because most of his lessons were at indoor pools, the echos caused him to miss most of the instructions from his teachers. The sweet kiddo did so much better when it was just him, outdoors with no other kids around making distracting noises.

When outdoors and working on back strokes and floats, try and position yourself so that you cast a shadow over your child’s face. Sun glaring in your eyes is no fun for anyone!

Try and practice swimming when there are less people around. This will help the noise factor, but also help kids not be as self conscious. My son was older when he learned to swim and was very aware that his fears were only felt by him and little kids. Support their need for privacy as they work through their challenges.

Another reason to avoid crowded pools…less chances of an accidental splash to the face!

Find the right teacher. As much as it hurt my homeschooler pride to admit, I was not the best teacher for my son. This was the major turning point for us.

I had tried hiring teachers at a number of different professional “swim schools” and they all failed because of what I’ll cover in the next paragraph.

What finally clicked was when I ask one of my dearest friends to teach my kids. We had actually been lifeguards together way back when, so I knew I could trust her methods and my boys knew they could trust her. We also were able to swim nearly every day for two weeks, instead of one lesson a week. I think that was a big factor as well! 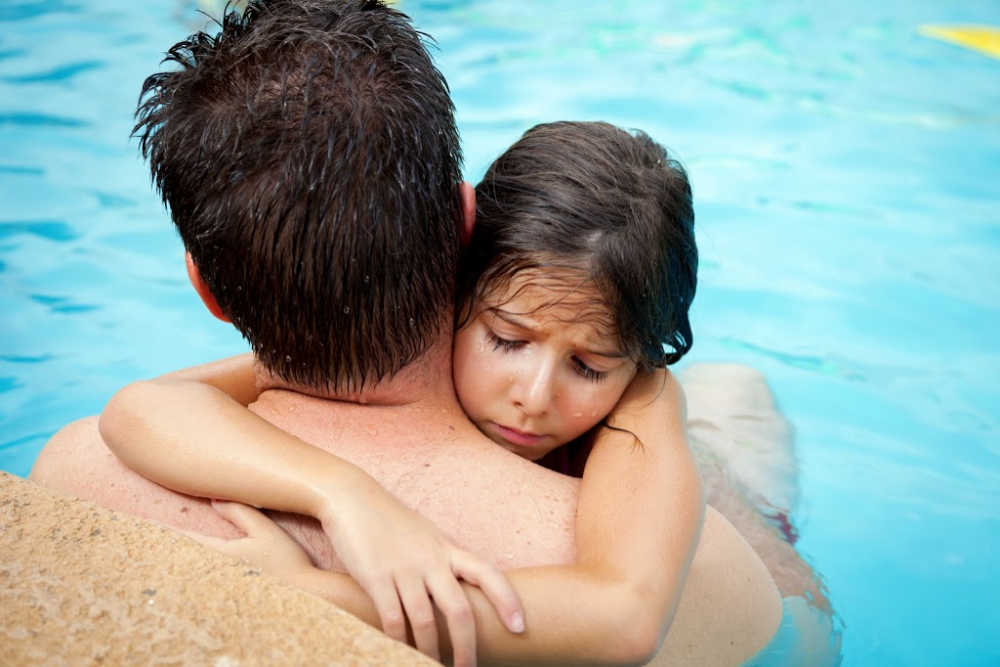 The One Thing You MUST Have

While I already alluded to it, the one thing you MUST have to teach a sensory kid to swim is… their trust.

So many of the teachers we had hired used the “trick ’em” method to various degrees. From tossing them in where they couldn’t touch, to dunking their heads to splashing them in the face, they basically were lazy and forced the issue on my son, further causing him to retreat in understandable fear.

If you’re a long time reader of this blog, you probably know that one of the big reasons sensory kids have behavior issues is because they lack a sense of control due to their sensory needs.

Swimming is already a very frightening prospect for them. If you couple that with an untrustworthy adult who is supposed to protect them, good golly, you’ll only make things so much worse!

Instead, communicate what you’re doing or expecting. Make your “asks” small. Realize it’s going to take 300 million baby steps. Focus more on building trust than building skills. Things will actually go faster once you accept that.

Swimsuits that aren’t a Tactile Problem

If your child struggles with tactile aversion to clothing, they’re probably going to have similar issues with swimsuits. You’ll have to get creative and think outside the swimsuit box. Often times kids will enjoy rashguard type compression clothes. Consider cutting out the mesh lining of boys trunks as long as the legs are long enough for modesty.

Techniques for Getting the Face Wet

(If your child struggles to do things on their front because they don’t like to put their face in the water, don’t neglect practicing strokes on their back!)

Like any child getting comfortable with the water, encourage kids to try blowing bubbles. If they’re not ready for that, play a game of “Simon Says” and have fun putting different body parts like ears, cheeks and forehead in the water.

While a lot of people think it’s a bad idea to let a kid become dependent on goggles, I knew that without them, my son wouldn’t ever go near the water. Eliminate one of their major fears, and deal with weaning them from it once they’re strong swimmers. 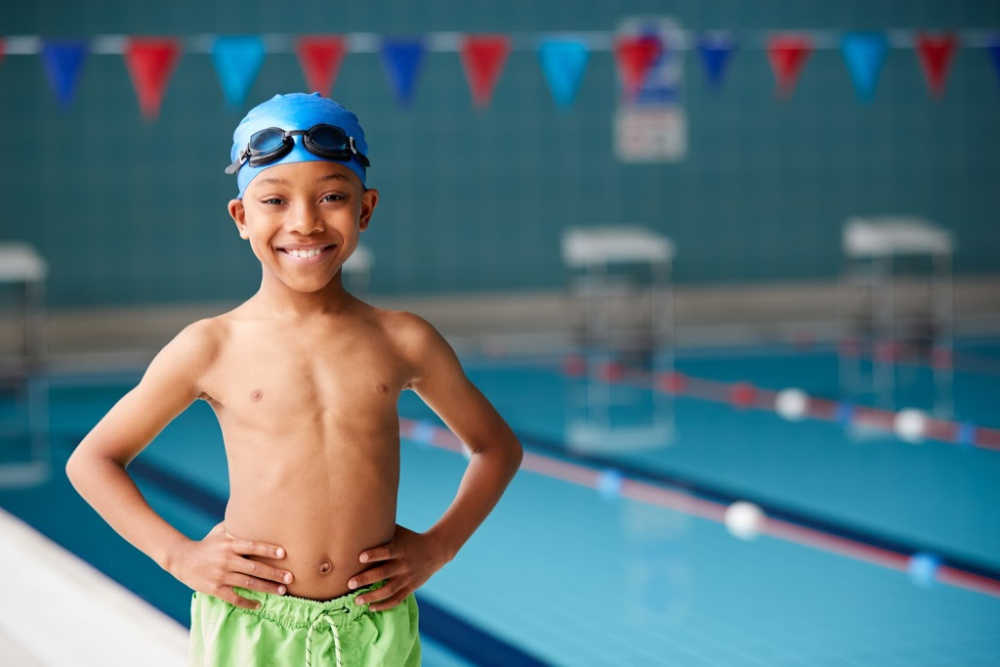 Even with goggles, my son didn’t want to put his face in. It wasn’t until we used the face mask for a snorkel, that covers the nose, that he finally had the courage to put his full face in. Use the snorkel tube as well if you’re child is really needing extra incentive to look underwater.

The thing that convinced my son to fully commit to putting his head underwater was some good old-fashion fun and competition (with a hint of trickery.) I invited my boys to play a game of retrieving diving sticks. I started by throwing them in a location where he could reach the bottom for the pool with his hand while still keeping his head above water. I slowly threw it deeper and deeper until eventually he voluntarily submerged his head so that his younger brother wouldn’t win the game!

Techniques for Getting the Head Back

(If your child doesn’t float well on their back or resists leaning their head back because it bothers their ears or stability, consider working on front strokes more. Most kids have a strong preference and it might surprise you.)

Practice in the Tub

If your child struggles to lean their head back to get their hair washed (you better check out this post about helping a sensory kid with bath time struggles) you can bet the pool will be no different. Yet sometimes the tub is less intimidating than the pool because it’s private, familiar, and the water level can be so low that the child can rest their head on the bottom long before their ears even go underwater. Seriously, just have a inch or two of water in the tub and let your kiddo practice leaning their head back until it touches. It will greatly increase the confidence of a child with gravitational insecurity.

Practice in a Zero Depth Pool

Same idea here, but it moves the locations a bit closer to where you eventually want to be. Have your child place their legs in the deeper end, while their head is in the shallowest part of the “beach”.

Like I already said, many kids with sensory issues have poor body awareness. Often times, they can’t copy what you demonstrate. Kids with poor proprioception often need to see their body positions and movements or they don’t realize what exactly their limbs are doing! Ever asked your child to do the front crawl and they windmill their arms in the wrong direction yet seem clueless as to why they don’t go anywhere? Yeah.

Start with Strokes that are “Symmetrical”

Thankfully, there are strokes that don’t ask the right and the left side of the body to do opposite things. While the butterfly is pretty hard for everyone, consider teaching a modified breaststroke (use a flutter kick) for a face down stroke. And for a back facing stroke, we’ve had great success with the elementary backstroke. We eventually want them to be strong backstrokers and front strokers so they have a powerful stroke if they were ever having trouble in the ocean or something, but for now, I just want them to be able to stay afloat and get to where they want to go.

Since kids struggle with bilateral coordination, help their body to do the strokes. I have to physically remove my kids from the pool and move their arms for them and do it over and over, hoping to create some pathways in the brain of what those movements feel like. It takes time, but be patient. Remember, this is really tough for them.

So those are my tips I’ve gleaned the hard way after spending 7 years trying to teach my son to swim. We’ve still got a ways to go before I’m comfortable with his skills, but we’ve come SO very far and I’m ridiculously proud of him!

Let me know in the comments what swimming struggles you’ve had in your family and if you have any pointers for me!