This post has taken me longer to write than any other. It’s in three big chunks, and if you’re a guy, you’ll probably want to skip over the birth story and on to the second section labeled “birthmarks”. 😉

This story is certainly not the simple birth story I expected to write. This story is still unfolding and I promise to write an update soon. Our family is already so thankful for the outpouring of love and prayers we’ve begun to receive!

(For an UPDATE on what we found out about our little guy, fast forward a year and read this.) 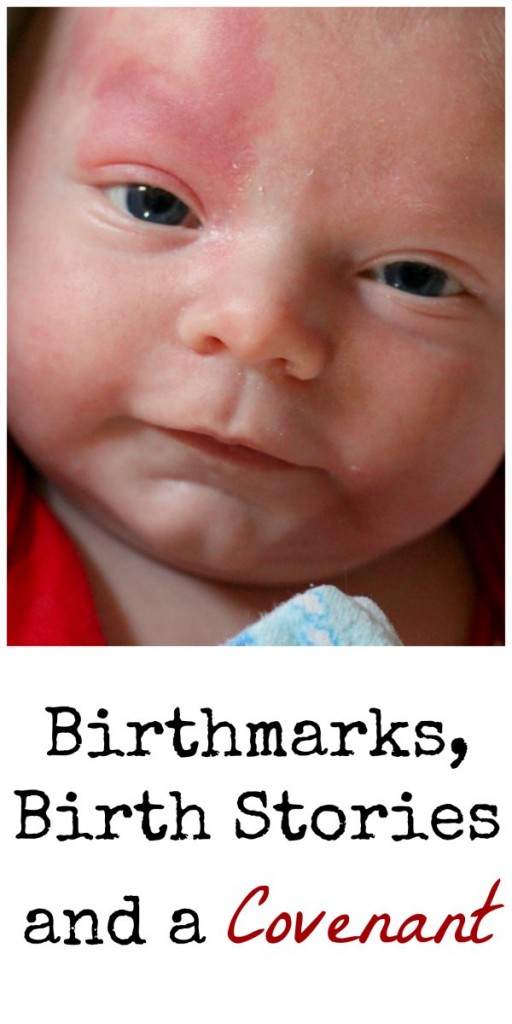 I’m not going to sugarcoat it. The last half of this pregnancy has been ROUGH. My hips have refused to work, leaving me dependent on canes, walkers, and the kindness of others.

Our birth center of choice hadn’t actually opened up yet, despite six months of promises. Their other location was available, but too far away to guarantee I’d make it there in time. (Hello, local news team! Why yes, I did just have this baby along the side of the road!)

I was stressed and in pain. There were so many unknowns.

Even in pregnancy I called Lovebug my most cooperative baby. He and I seemed to have a connection.

Every time I’d think to worry because I hadn’t felt him kick in a while, he’d move around within 30 seconds! Every. single. time.

He was every bit as cooperative in birth.

He waited to come until the birth center had been open two days. I had been saying all along that my best guess for his birthday would be the 20th, since my older two children had been born on Fridays closest to their due date. When I was feeling “off” on Friday morning, I asked my husband to stay home from work. When my soon-to-be middle child refused to nap, I asked my mom to take the older two boys to her house so I could get some sleep.

I’d been SO nervous about having a roadside baby because I only had eight minutes to spare with my last delivery. So I was hoping this time that the start of labor would be OBVIOUS.

One swift kick woke me from my nap, with my water breaking and contractions starting immediately.

It was perfect. Husband was already home. Brothers were already at the grandparents. I had just had a nap!

On our way to the birth center, the on-call midwife made contact with us. I was shocked to hear the voice of the same midwife who had delivered Lumpy, my absolute favorite! She wasn’t even supposed to work at the new location, but because of all the special accommodation for me, she happened to be our gal.

I started to cry happy tears right there. It was such a sign that God was right there with me, easing my fears.

When we arrived at the birth center, we quickly settled in. However, I was none too pleased when I found out I was only 3cm dilated. (My first birth had taken over 28 hrs and forced me to face my fear of death!)

At that point, I hissed to my husband, “Why do I keep trying this stupid natural birth thing!”

10-15 minutes later, they were checking my progress again. Contractions were nearly a minute and a half long and barely two minutes apart (hardly any down time). I was at 7cm and already wanting to push.

I didn’t realize that a water birth was an option with my water breaking and all, but I gladly accepted the offer.

As I climbed into the tub as large as my bed, I had a contraction and settled in to start pushing. Unfortunately, the tub was so massive that my feet couldn’t reach the far side and I felt like I could slip under and drown! Andy leaned over the expanse, holding me under the arm pits.

Pushing feels good in a awful sort of way. It’s the most primal I have ever felt. The growling screams coming out of my throat scared even me!

About three contractions and his head was out. In my confusion, I panicked at the thought of his head underwater. But everyone assured me to wait for the next contraction to push his shoulders out. That hurt worse than crowning. He had come so fast that he presented transverse, meaning sideways! So those shoulders pretty much wrecked my tailbone, ouch!

The whole labor was one hour and twenty minutes, start to finish. Crazy!

I’ll always remember the weight and warmth of him as they placed my son on my chest. Perfect.

After climbing out of the tub and flopping onto the nice warm bed, I started to inspect my new child up close. He looked liked he’d been in a bar fight. But all my boys looked like that moments after birth. It wasn’t until about 15 minutes later that my midwife first mentioned the “bruise” I saw on his eyelid and forehead.

“It could be a birthmark. We’ll know soon.”

I was incredulous. My son’s flawless, lady!

But soon after, she confirmed that our little boy has a permanent birthmark covering a good chunk of his face.

I felt so shallow, but I cried anyway.

How would this affect him? The phrase, “A face only a Mother could love.” kept taunting me.

Nobody wants their child to be judged or excluded before they’re even known and that was my huge worry.

Or what I THOUGHT was my huge worry.

A couple days passed and then I received a random Facebook message that rocked my world.

A gal I barely know, told me that because of the type and location of my boy’s birthmark, he could be at risk for glaucoma and a syndrome called Sturge Weber.

Good ole Google told me a bit about SWS. I saw words jumping off the page like “seizures”, “mental retardation”, “physical handicaps”, and “progressive brain atrophy”, each phrase a new icy finger of terror gripping my heart.

I started sobbing uncontrollably as I told my husband the horrifying possibilities. That night was one of the worst nights of sleep I’ve ever gotten, and trust me, I’ve had some bad ones! My mind would not shut off. I honestly contemplated taking him to the ER in the middle of the night to get a brain scan done. I could not stand the thought of not knowing.

So does my precious son have Sturge Weber Syndrome?

I don’t know yet.

Why write this post now, pulling you into my world of unknowns? I debated for a long time about when to write this post, before or after test results came back.

But this story, our story, isn’t really about test results. It’s about a covenant.

Not exactly a word used much in today’s culture. But it’s at the forefront of my mind right now.

I’ve always heard that God has made promises to us. But I’d always feared taking Scripture out of context, applying words to myself that were really meant for the original audience of the Bible.

I found myself believing that most of God’s promises had loopholes and fine print. I couldn’t really trust and rely on much of anything beyond basic salvation.

Then I started studying covenants.

The God of the Universe is in a covenant with me. One that He initiated. One that He has been steering all of history towards. One that was sealed with His blood. One that He is incapable of breaking. One that I can’t do anything to screw up or make void.

I bring my filthy rags, He brings flawless righteousness. (Isaiah 64:6)

I die to myself, He lives life abundantly in me. (Galatians 2:20)

Forgiveness, Life, and God’s unrelenting favor (Jeremiah 32:41) because He has united Himself to me in this glorious covenant.

I can’t possibly pack all that God has promised to me into a couple paragraphs. But the gist of it is this.

He wants to shower me with good, real good. And He’s faithful and more than capable to do it.

It’s as good as done.

So where does my son play into all of this?

It’ll be easy to see God’s goodness if my son doesn’t have Sturge Weber, and we pray to that end.

But if he does…

God knows all and has everything under His authority. He has also PROMISED to do nothing but good to me. It might be incredibly painful, but it will be best. Having a son with SWS will be the best gift, the better gift. 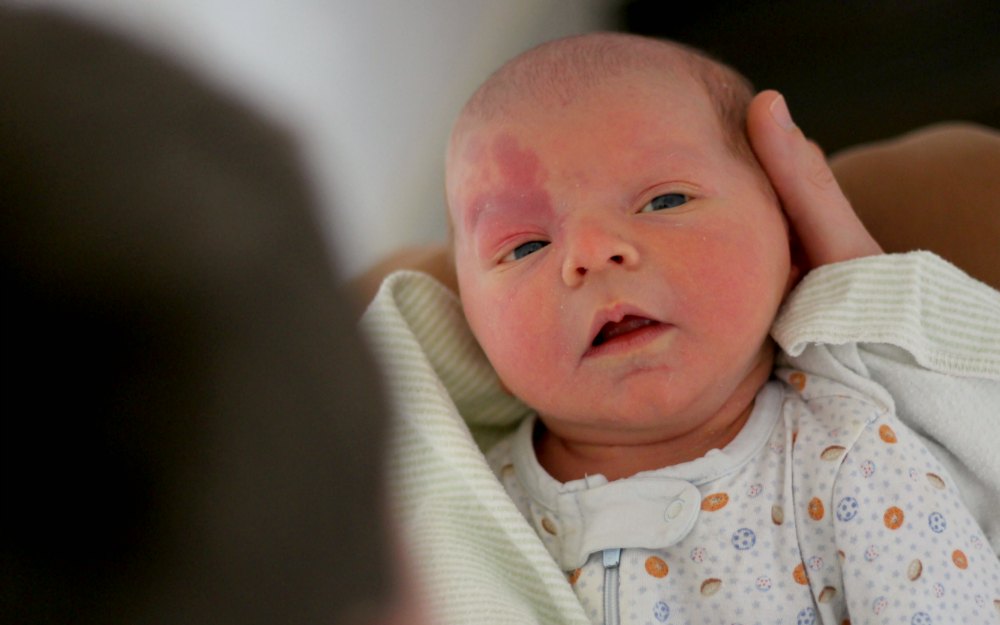 I’m a parent. Every day my children and I disagree on the definition of “good”. They think it’s mounds of candy and never-ending TV. I have slightly more perspective. 🙂

Sometimes I insist they go through something hard; something that can’t possibly see the benefit of.

God may be asking me to do something similar. I don’t know.

(Welp, it’s been a year. Read this to get the update!)