Inside you’ll find: Thoughts on disciplining a child with Sensory Processing Disorder when you can’t tell if it’s behavior or sensory.

My son had just body slammed my mother with the force of a rhino.

My son was oblivious.

I was frozen in indecision.

Why in the world did he do that? How should I respond? There are always so many factors to consider… his age, his intent, if he’s aware of how unacceptable it was. Oh and there’s that tiny issue of his Sensory Processing Disorder.

Sensory Processing Disorder affects the way the brain handles sensory input and decides what to do with it. A typical brain can sift and sort through all the sensory information coming at it and decide what’s important, what needs to have the child’s focus, and what might be a danger. In a child with SPD, the brain often over reacts or under reacts to the sensory input and causes the child to use a fight or flight reaction.

How does this affect everyday life? Let me give you an example.

Desires to be Physically Rough

My son under reacts to Proprioceptive input. That means he CRAVES firm touch, pressure and heavy work. This can lead to some unusual interactions. Like when he was slapped across the face by his younger brother, he responded by saying, “Don’t make him stop! It feels good!”.

(Tired of being baffled by behavior? Always have the perfect sensory activity for every situation! Whether you have equipment or not! Get some super helpful FREE printables and access to the VIP section of the blog by clicking here!)

I’m sure you can imagine how this could be a problematic behavior. What feels good to him, hurts others! I’m constantly reminding him that while he likes “strong touch”, most people want “soft touch”, and he needs to respect that.

My son over reacts to Vestibular input. That means when his inner ear receives input (think movement and balance), it often triggers major fear and loss of control! Thankfully with therapy, this has gotten MUCH better, but I’m sure you can imagine how hard it was to function during everyday life.

Closely related to his problem with Vestibular avoidance is that he has a hard time distinguishing background noise from foreground noise. In crowds, he often can’t pick out my voice and is completely washed away in all the other sounds coming at him. But of course, he’s a normal four year old and often just chooses to ignore me or pretends he can’t hear me. I struggle to know which it is and feel guilty when I guess incorrectly.

With so much being out of their control, including their bodies, children with SPD often cling to any little thing they can control. I feel like nearly every moment with my son is a power struggle. It smacks of willfulness and disobedience, but it’s often a cry for help. Trying to balance his desires with correcting his heart is my full time job.

So how do I parent his heart while acknowledging his legitimate needs??? I’m no expert, but this is my current strategy…

My son is at the age where he needs to know what is and isn’t acceptable. Hitting is never acceptable, despite any extra factors that may have lead to it. I don’t immediately assume it came from ill motives, so I’ll say something like, “It’s not ok to hit. Ever.” Then I’ll probe deeper to see if the aggression came from a sensory seeking behavior (he’ll often be clueless that it hurt the other party) or from anger (he’ll tell me why he’s upset with the person.) So even if the act was caused purely by his sensory needs, he must know that he’s gotta find a different way to meet that need.

I used to have zero consequences when my son acted out purely from a sensory need. I’d correct him, but nothing beyond that. Now he’s old enough that I desperately want him to develop self-control. He’s been told many times what is and isn’t appropriate. It’s time for him to see that there are consequences for things, and he always has some choice, a way out, in the matter. When he acts out from a purely behavioral standpoint, the consequences are more immediate and “harsh”.

Of course, as you sensory parents know, most incidents are a mixture of both behavior and sensory. So there are consequences, but usually only after much discussion and probing questions.

I want my son to see how both his heart and his brain are factors and give him the tools to change. 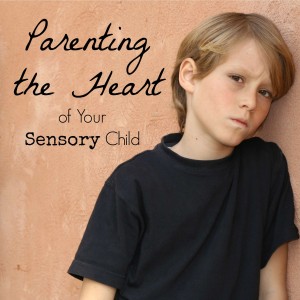 Help Them Identify Their Sensory Needs

This is a big one. I used to think I was going to keep my son in the dark about his SPD because I didn’t want him feeling different. Now I know that that would just cripple him. The more he knows, the more he can understand himself and the world around him. And hopefully, he choose to meet his sensory needs in acceptable ways, before they interfere with life.

One book I highly recommend is How Does Your Engine Run?

by Mary Sue Williams. It full of vocabulary and practical ways to help your child idetify and regulate how their sensory “engine” is doing and how to keep everything running smoothly. My son is already picking up the lingo. He loves the extra control and ability to communicate with me about things that used to mystify us both.

I wish there were a billboard above my son’s head that would tell me what mix of sensory and behavior I’m dealing with at any given time and exactly how to respond. But instead, I’m fumbling around, doing the best I can. I’ve made mistakes, big ones. Often my impatience is incredibly childish.

All I can do is be humble with my son, apologize, and try better next time. He needs me to guide him, to be an authority, but one that listens and understands his unique needs.

If you have a go-to strategy for deciphering your child’s complicated behavioral patterns, please share it in the comments section. It might be just the thing another Sensory Parent needs to hear.