Let me embarrass myself yet again on the internet.

When I was a kid, all the way through middle school, I wanted to have 12 kids. TWELVE!

I had their names all picked out. (Why yes I wanted quadruplets named Faith, Hope, Joy and Grace!) I’d decided how I wanted to space them apart age wise. I even researched vehicles that could haul a troupe that big.

It probably wasn’t until high school that bits of reality started to break through my day dreams. I decided five kids was the perfect number. I have an flawless line of reasoning behind this number, but I’ll spare you the details.

Even when I got married, I adamantly  stuck to the number five. Granted, I never convinced my husband to get on board, but whatever.

Then I had my first child.

Now, I don’t consider myself a fool. I knew kids were a lot of work!

But my child broke the mold when it comes to being fussy. And if you know my story, many, many other factors contributed to my eventual descent into severe post partum depression.

By the grace of God, I survived that season. It was torture, plain and simple and I never wanted to go through it again.

Oh, except that I wanted more kids… 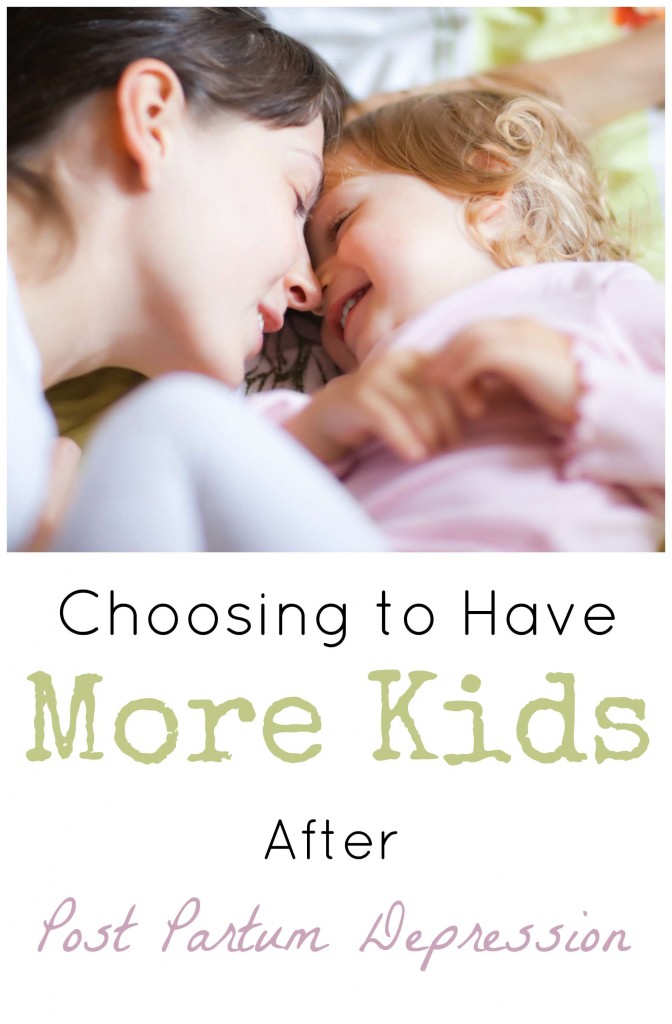 I had extreme PPD with my first child. We choose to have another child and I went through it again, though less severe. I even wrote a post called “Why I’m GLAD I went through PPD again”.  Now we’re getting ready to welcome our third son!

But he will be our last planned biological child.

Getting PPD Again is Quite Likely

While it’s not a given, you’re chances of getting PPD again are more likely than someone who has never experienced it.  Some factors that can lead to depression are probably still true the second time around, like a family history of depression. The American Psychological Association estimates the chances of getting PPD for the first time at 9-16% while the likely hood of getting it a second time increase to 41%. Unfortunately in this case, lightning really can strike twice.

It will Feel Just as Real

I’ve had PPD twice now. Before having my second child, I thought my depressive thoughts would be obvious this time around, like I’d know they were intruders or something! Well, they actually felt just as real, just as overwhelming and hopeless. The intensity didn’t lessen. So don’t underestimate the fury, anxiety and other feelings you’ll experience a second time around.

When you have post partum depression with your first child, only an infant sees you at your worst (which is bad enough). But when you’re on subsequent children, their older siblings are watching you have meltdowns and adding to your stress. The older child may not understand the powerful emotions running through their mother and that can have an ill effect. And along those same lines…

I’m not sure who went through more turmoil, myself or my husband. Watching me fall apart and threaten suicide daily could not have been an easy road to journey. My husband had to bear a burden much larger than most. Choosing to have another child effects your partner almost as much as it effects you, so take their feelings seriously.

You Know the Signs

You know what to look for and you’re not going to be blindsided this time! Please don’t waste time in a state of denial. It only makes things worse. (Keep other people in the know about your typical symptoms so they can intervene as well!)

Practice makes perfect, right? You have fought through some pretty icky stuff once before and you’re stronger for it. You probably know your triggers. You probably know some calming techniques. You’ve learned that you cannot let thoughts and feelings dominate you and you know how to preach truth to yourself.

You Can Get Support from the very Beginning

I pray you have a team of people who know and love you, cheering you on! They are an invaluable resource. Let them in. Be vulnerable and share your previous story and ask them to help you as you go through those murky waters again. Before I had my second son, I shared this very story on my personal Facebook page and with the leadership at my church. I was new to the area and knew I had to get real with people quickly and ask for help. PPD is NOT something to fight alone.

This made the biggest difference for me! In my first bout with PPD, I could. not. imagine. EVER being happy again. I thought my life was broken beyond repair. I truly couldn’t even daydream up a magical scenario that would make things right again. But yet, there is One who brings life to the lifeless and hope to the hopeless. Now that I’ve experience that “There and Back Again” roller coaster, I’m far more confident that life will return to “normalcy”. Again, the feelings are still just as intense, but I can battle those with the reality that I’ve lived through them once and seen them disappear before.

Sorry, I’m not going to tell you if you should have more children. It’s a complicated beast.

We decided to have to more, but the dream of five… well, it’s just too much for my reality.

Please take post partum depression seriously and consider what is best for your family! I wish you all the best!

If you want to read MORE helpful advice and vulnerable truths, sign up for our newsletter and stay informed about new posts! We care about you here!